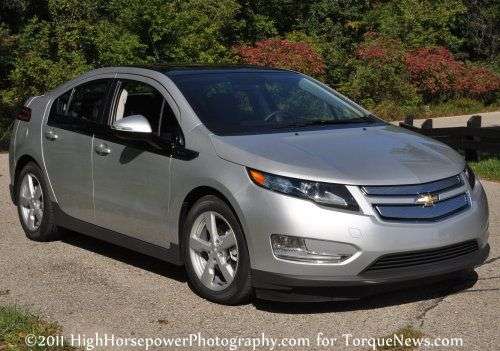 While GM has not confirmed the news, unnamed sources have indicated that the General Motors Hamtramck Assembly Plant that builds the Chevrolet Volt will take four weeks off starting in September and running through October – marking the second time this year where GM has paused production of the hot selling electric Chevy.
Advertisement

Automotive News has reported that two unnamed sources who are familiar with the matter have indicated that The Detroit Hamtramck plant will go idle starting on Monday September 17th with production expected to kick back off on October 15th. Evidently, local UAW officials notified the 1,500 workers at Hamtramck late last week that they would be getting 4 weeks of unplanned vacation starting in the middle of September.

Unfortunately, General Motors has simply stated that they do not comment on production schedules but the GM rep added “We continue to match supply and demand.” Based on that and the UAW announcement to the Hamtramck workers; it would lead us to believe that GM has an adequate number of new Volt electric sedans already built to fulfill the current demand. Provided that is true, it is good to see General Motors slowing production when it is not needed as “old GM” was frequently criticized for over-producing models when there was not enough demand. Having completed vehicles sitting around, going unsold, hurts the bottom line so a short period of downtime like this will allow GM to burn through their current stock of new Volts. Also, for those folks who like to gripe about the government "bailout" loans, this move shows that GM isn't wasting money building vehicles that they don't need right away.

While downtime is always a bad thing as the workers lose out on a portion of their pay, things are getting progressively better at the Hamtramck and will continue to do so in 2013. Through 2012, the Chevrolet Volt has seen much stronger sales figures than 2011 and in doing so – the Volt has vastly outsold the Nissan Leaf in 2012. Through the end of July, 10,666 Volts had left the dealership en route to a consumer’s garage while Nissan had delivered just 3,543 examples of their Leaf EV. In addition to the Volt, the Hamtramck plant currently provides some overflow production for the 2013 Chevrolet Malibu (in low volumes) and starting in the first quarter of 2013, Hamtramck will add a second shift to build the new 2014 Chevrolet Impala.

Highway Mode could improve US sales
The 2013 Chevrolet Volt is only getting a few simple additions (like a body colored roof) but one new feature in particular could make a big difference to consumers. The 2013 Volt will come with a highway driving mode that essentially locks the gasoline engine into the running position so that it is constantly charging the battery. Highway use at higher speed is the hardest aspect of regular driving on the battery charge and the driving range of the Chevy Volt so when driving on the highway, most Volt owners will get less electric-only mileage than when driving around town on lower speed roads. The highway mode will allow a Volt driver to spend time on the highway without depleting the battery so when they get to a more congested, city setting – there is plenty of battery power left for efficient, emission free driving.

Say that a 2012 Chevy Volt owner begins his or her 55 mile morning commute with a 45 mile highway drive followed by 10 miles of more city-style driving. Realistically, the 45 mile highway drive will deplete the electric driving range so when this driver gets to the last 10 miles of their drive – they will be relying heavily on the gasoline engine to provide charge to the battery. Should that same driver make that same 55 mile drive with the 2013 Chevrolet Volt in highway mode, the gasoline engine will run during the 45 mile highway drive so when the driver reaches the 10 miles of city driving, there will still be plenty of battery power left to provide emission free driving during those last 10 miles. Also, should someone wish to make a long trip with their 2013 Volt, running in highway mode will keep the battery charged over long distances so that the battery will still pack some juice to flex its electric muscles in a city setting.

The ability to control the flow of battery power could be very enticing for the millions of Americans who make long commutes every day as they would be able to save their battery power when driving on the open road at higher speeds. This, combined with the emission free driving around town could make the 2013 Chevy Volt a better choice for more American drivers…thus further increasing the sales success of the Volt.

Suthy wrote on August 29, 2012 - 8:09am Permalink
I thought that the bailout machine was outselling all of the other cars and doing really well and stuff? Why do they keep stopping production!
Eduardo wrote on October 14, 2018 - 10:33am Permalink
There is perceptibly a bunch to identify about this. I assume you made some nice points in features also.