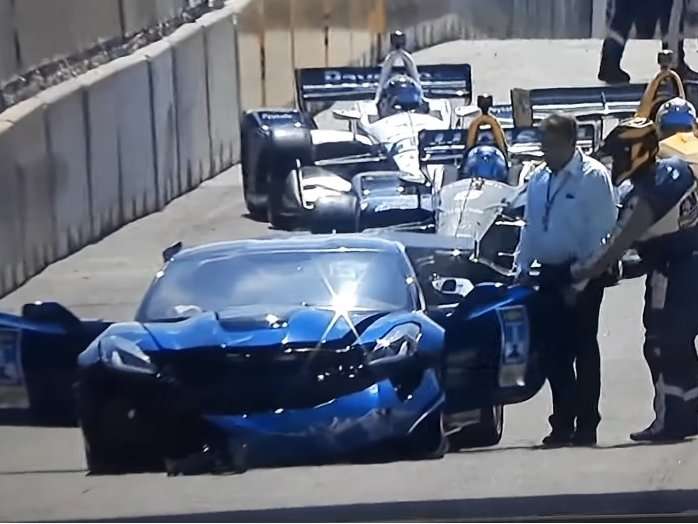 A new 2019 Chevrolet Corvette ZR1 served as the official pace car for the 2018 Detroit Belle Isle Grand Prix, but as GM exec Mark Reuss prepared to bring the field around for its first pace lap, the automaker’s Vice President of Global Product Development lost control of the 755-horsepower supercar, slamming hard into the wall and forcing the field to come to an immediately halt.
Advertisement

Each year, the IndyCar Belle Isle Grand Prix in Detroit is an important date on the schedule for both the city and Chevrolet. The weekend-long event includes a variety of different forms of auto racing, including trucks, LeMans cars and, of course, Indy Cars, so it draws a massive crowd to the Motor City for what is really one of the most exciting weekends of motorsports in Detroit each year. As you might imagine, with that big crowd comes lots of money, as fans contribute to the local economy not just at the track, but at the hotels and other supporting businesses in the area.

For Chevrolet, the Belle Isle Grand Prix is a chance for the company to show off their successful Indy Car engine program, but it also allows the automaker a chance to feature their high performance road cars in a venue where spectators are obviously very interested in high performance machines. Chevrolet has displays where fans can check out the newest models up close and for the past few years, a Chevy has led the field to the green flag – serving as the most prominent display of the brand’s vehicles.

Chevrolet is the title sponsor of the annual IndyCar Belle Isle Grand Prix in Detroit and that makes sense, with the race being run in the shadow of the company’s towering Motor City headquarters. As the title sponsor, the brand provides the official pace car and with Chevy introducing the 755-horsepower Corvette ZR1 for the 2019 model year, it comes as no surprise that the supercharged supercar

Who is Mark Reuss?
Since the videos of this crash began traveling around the internet yesterday, a great many commenters have been quick to take shots at the driver of this ill-fated Corvette ZR1 – GM Executive Vice President Global Product Development Mark Reuss. These uninformed internet users insist that he is just an average stuffed shirt who has no business behind a vehicle of this nature, but that is far from the truth. As the brief statement from General Motors below points out, Reuss is an experienced driver of high performance test cars along with being a major supporter of the entire GM high performance portfolio.

“Reuss is a certified industry pool test driver on the North Course of the Nürburgring track in Germany. He also created and led the GM Performance Division in 2001, when he was responsible for GM racing vehicles, as well as production versions of Chevrolet SS models and the Cadillac V-Series."

So what happened? Belle Isle claimed another victim and this time, it was a 755-horsepower pace car.

The Crash
There are scores of videos online showing the 2019 Chevrolet Corvette ZR1 pace car crashing, but they all show the same thing from a few different angles.

The crash occurred in turn #2 as the field began its first pre-race pace lap. This is a sweeping left-hand turn with a slight rise in the pavement just before the exit of the turn. As we can see in the footage, when the new Corvette hits that rise in the pavement, the tires begin to spin, the back end comes around and the car slams head-first into the track’s outside retaining wall.

Fortunately, the field of Indy Cars close behind Reuss and the Corvette was able to stop when the wrecked ZR1 coasted across the track and both Mark Reuss and his passenger escaped without injury.

While I have never run a Corvette ZR1 hard on the Belle Isle course, I have run a supercar with a bit less power on a track with a similar rise in the pavement at the transition between a turn and a straightaway. What often happens – and what appears to have happened here – is that as the car hit that rise in the pavement, the suspension setup of the ZR1 was unloaded for just a second. When the suspension was unloaded from that rise in the pavement, there was a split second where the car’s weight was lifted off of the tires, but it appears to be at the point where Reuss began to accelerate out of the turn.

The combination of applied power and the lack of weight on the rear wheels forced the car into an extreme oversteer situation that could not be rectified and the new Corvette ZR1 slammed head-long into the outside wall. GM’s official statement claims that track conditions and weather played into the crash and while the Belle Isle course is known for being sketchy at times, anyone who has spent any time on a road course can see in the video that weather and track conditions weren’t at fault here. If not for that rise in the track coming out of turn #2, this crash likely wouldn't have happened.

In the long run, while this proves to be an unfortunate situation for General Motors, Chevrolet and the Corvette team, the important news here is that Reuss and his passenger were ok and the race eventually continued as planned.