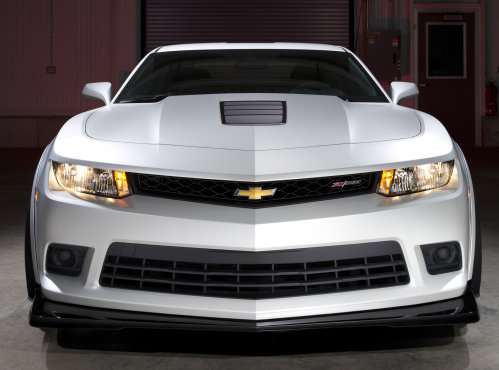 The 2014 Chevrolet Camaro Z/28 will be powered by the same LS7 V8 engine as the current Corvette Z06 when it arrives early next year but during the development stages of the new super Camaro, GM considered using the less costly 6.2L LS3 from the base Corvette – later opting for the more powerful (and more impressive) 7.0 liter LS7.
Advertisement

When the new 2014 Chevrolet Camaro Z/28 hits roads and road courses around the US next year, it will be powered by the 7.0L LS7 V8 that has previously only been used for the Chevrolet Corvette Z06. In Corvette duty, this mill offers 505 horsepower and 470lb-ft of torque and although GM hasn’t stated the exact power output of the 2014 Camaro Z/28, GM has stated that it would produce similar power in the Z/28 as it does in the Z06. This engine will provide plenty of power for the Z/28 while leaving room for the higher performance Camaro ZL1 and weighing less than the supercharged LSA V8 in the ZL1. The only downfall is that this hand built high performance 7.0 liter V8 is among the more expensive engines in the GM arsenal.

Because of the added cost of opting for the Corvette Z06’s LS7, General Motors’s design team considered powering the 2014 Chevrolet Camaro Z/28 with the same LS3 V8 that is found in the base model Corvette. This is the same engine that is fitted in the manual transmission Camaro SS with the power output ranging from 426hp in the Camaro SS to 436hp in the 2013 base Corvette with the dual mode exhaust system. With some minor tuning work, the GM engine team could almost certainly increase the power a bit from the LS3 without having too much of a negative impact on the fuel economy measures (keep in mind, the Z/28 is subject to all of the same EPA requirements as the rest of the lineup) and with somewhere in the area of 450 horsepower – the Z/28 would be distinctly more powerful than the Camaro SS.

While it seems like a no brainer that the 2014 Camaro Z/28 would have the most powerful engine possible, we have to remember that this car is designed to be the fastest road racing Camaro of all time. When we consider how much lighter the Z/28 is than the Camaro SS or even the Camaro ZL1, a 450 horsepower LS3 might have been enough to make this new package stand out in terms of performance but GM followed in the time tested tradition of packing a performance car with the biggest engine on the table.

Of course, the inclusion of the Corvette’s previously exclusive LS7 in the 2014 Chevrolet Camaro Z/28 means that this new package will carry a higher price when it arrives next year compared to the same vehicle had it been powered by the LS3. The MSRP of the Z/28 would have likely been at least a grand or two cheaper (if not more) had it been powered by the LS3 and a lower price would have likely meant more sales. However GM believes that the greater power and the increase in the overall performance capabilities of the Z/28 with the LS7 will justify the higher price and – in turn – the lower sales volume. In the long run, the Z/28 will likely be a fairly low volume package compared to the likes of the Camaro SS so driving away a few prospective buyers who cannot stomach a price tag that is a few grand higher won’t have much of an impact on GM’s bottom line. Also, the added power will likely appeal more to those deep pocketed buyers who want to go fast and those types of buyer are greater in number to the people who will realistically be turned away by the slight increase in price due to the bigger engine.

Considering my deep seeded love for the 2014 Chevrolet Camaro Z/28, you can be sure to find all of the news on the new super Camaro issued over the next 8 or so months leading up to the dealership debut of the mighty Z/28.

Do you think that GM made the right choice for the Camaro Z/28 engine? What is better...a few more sales or a bunch more power? Tell us what you think in the comment section below!

Bryan Baker wrote on April 9, 2013 - 8:40pm Permalink
Why didn't they consider an aluminum LS3 with a two-stage turbo system? a small super quick spooling turbo, which helps the larger turbo spool and have it kicked in at around 3500 or more RPM?
john wrote on April 9, 2013 - 10:18pm Permalink
fantastic car! can't wait to see it. i would swap in my 1970 chevelle SS454 for one of these!
Patrick Walker wrote on April 10, 2013 - 12:15pm Permalink
This is a great car. I think that they should create and option of having the LS7 engine in a SS combined with a 1LE only option. This would create another vehicle in the Camaro line up between the SS and ZL1, and it would create a more viable vehicle to compete against the competition. This vehicle would sit in between the Mustang GT and the GT500 and obliterate the GT Track Pack vehicle. And it would sit above the Dodge SRT/8 vehicles.
Bills wrote on April 11, 2013 - 9:52am Permalink
Great chassis, an excellent and proven power train, and awesome heritage for the name plate to carry forward. The interior is just too much Tonka-Toy cheap to be considered anything but a boy racer. Why can't GM infuse some dollars to fix this issue?