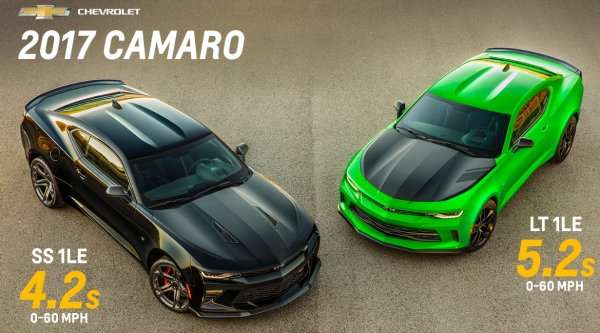 General Motors has announced the pricing and the performance figures for the 2017 Camaro 1LE packages in both V6 and V8 form, and based strictly on these preliminary numbers, it sounds like the 1LE package will convert the Camaro LT or SS into even more impressive performers for a surprisingly low price.
Advertisement

When the new 1LE package was introduced for the 2017 Chevrolet Camaro at the Chicago Auto Show, we learned that there would be a variation for both the V6 and V8 models for the first time. In the past, the high performance 1LE was only offered with the Camaro SS.

We also learned in Chicago that the 2017 Camaro 1LE with either engine would receive a host of upgrades which will significantly improve the performance, taking the Camaro LT from good to great and taking the Camaro SS from great to incredible – but we didn’t get any prices.

Yesterday, in the same release which officially revealed the horsepower, the 0-60 and the quarter mile time for the 2017 Camaro ZL1, GM also announced the pricing and some preliminary performance figures for the new Camaro 1LE.

“Building on Chevrolet’s well-established recipe for track-focused performance, the new 1LE packages expand the performance envelope of the Camaro SS and, for the first time, the Camaro LT,” said Al Oppenheiser, Camaro chief engineer. “You’ll be hard-pressed to find more track-capable cars in their respective classes for the money.”

Performance Figures
In addition to the pricing for the 1LE package, GM also announced some performance figures for the new high performance package in both V6 and V8 form.

The 2017 Camaro SS 1LE can get from a stop to 60mph in just 4.2 seconds and getting stopped from 60 takes only 107 feet, while this higher performance package can hold 1.02g on the skidpad.

Bigbusiness wrote on August 23, 2016 - 6:41am Permalink
You gave the figures but never gave us quarter mile times?