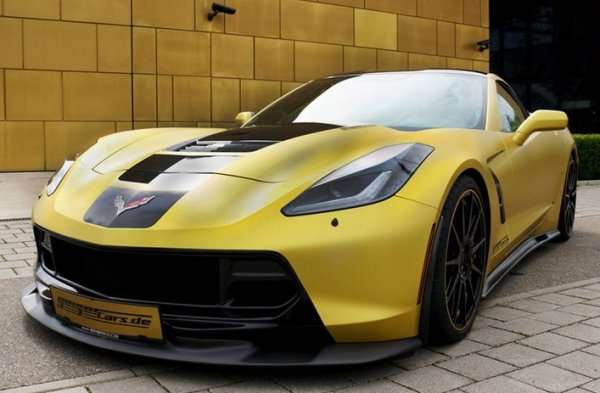 German tuning company GeigerCars has made a name for itself by developing unique packages for European-sold American vehicles and their take on the Chevrolet Corvette Stingray is just the latest in impressive custom packages – turning the basic C7 Stingray into a supercar that will keep up with the best across Europe.
Advertisement

If you want to buy an American car like the 2015 Chevrolet Corvette Stingray and you live in Germany, GeigerCars has you covered. GeigerCars offers a long list of American vehicles that include everything from mild mannered family sedans to heavy duty pickups to high performance models including the Corvette, the Dodge Viper and the Ford Mustang so there aren’t many requests that they cannot answer. The company also goes one step further, offering unique tuning packages for a variety of high performance models including the Chevrolet Camaro Z28 that we discussed a few weeks back.

The newest offering from the tuning division of GeigerCars is the C7 Chevrolet Corvette Stingray, which benefits from a host of changes to turn the well-known American sports car into a proper supercar.

The GeigerCars Tuned C7 Stingray
In modifying the new Chevrolet Corvette Stingray, GeigerCars began under the hood where the standard LT1 V8 has been fitted with an Eaton supercharger, raising the output of the Corvette from 455hp and 460lb-ft of torque to 590 horsepower and 558lb-ft of torque. The German tuner expects this to allow the C7 Stingray to reach speeds of 200 miles per hour and it can likely get there in a big hurry.

After the engine had been seriously beefed up, GeigerCars turned their attention to the handling capabilities of the C7 Corvette Stingray. A 3-way adjustable KW coilover suspension package has been added and in addition to improving the road gripping abilities of the Stingray, this suspension setup also allows for adjustments of between 10mm and 35mm to the ride height. Helping the appearance, the acceleration and the handling abilities is a set of unique rims measuring 19x9.5 up front and 20x11 out back – all of which are wrapped in high performance rubber for the most grip possible.

Finally, the GeigerCars team worked up a revised aero package for the 2014 and newer Chevrolet Corvette Stingray, including a unique hood with a more prominent raised center section, a unique front splitter, deep reaching side skirts, a more aggressive rear fascia, a unique low profile rear spoiler and a unique tailpipe setup poking through the aforementioned fascia. The European Corvette isn’t Cheap and Neither is the GeigerCars Tuned Version
The C7 Chevrolet Corvette Stingray is a remarkable piece of machinery by even the most strict standards, but acquiring one in Germany (or other parts of Europe) can be quite costly. A standard 2014 or 2015 Corvette Stingray Coupe with no special features will run you around 74,500 euros – or about $95,276 USD with the current conversion rates. If you find that you need GeigerCars to juice up your Corvette before you take delivery, they can sell you the 590hp version for 113,000 euros…which is $144,500 USD. That makes the GeigerCars tuning package an upgrade that will set you back almost $50k- but such is the price to pay to be one of the few European drivers with a 590 horsepower Corvette with a unique appearance.