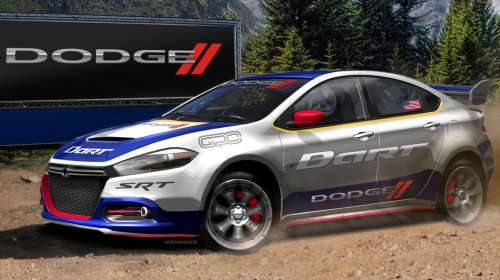 Earlier this week, TorqueNews brought you the news of the new rally car based on the upcoming 2013 Dodge Dart that will be piloted by championship rally racer Travis Pastrana and while we are not likely to see an all wheel drive Dart with 600 horsepower in showrooms any time soon - this new race car means a great deal to the Chrysler Group and their rabid enthusiast following for a handful of reasons.
Advertisement

First and foremost, Travis Pastrana and his new Dodge Dart rally car helps to put the Dodge and SRT names into the booming sport of rally racing. Ford Motor Company has made a massive move to jump into the growing rally racing world with signings of well known racers like Ken Block, Tanner Foust and Brian Deegan, the Chrysler Group’s Dodge and SRT divisions are relatively unknown to the rally world. Dodge has previously shown their interest in the rally world with the introduction of the Mopar-built Dodge Avenger rally car but that car was a bit…ummm…let’s say hefty to compete, the compact new Dodge Dart does not have that problem. With the introduction of Travis Pastrana’s Dodge Dart rally car, Dodge has a real chance to give rally mainstays like Subaru, Mitsubishi and Ford a battle in the new Global Rally Cross circuit.

Second, more than just having a competitive car in the form of the 600 horsepower all wheel drive Dodge Dart rally car, having a huge name like Travis Pastrana is a big deal in the motorsports world. A key to Ford’s success in the rally car world was signing superstar driver Ken Block, who brought with him a following from his successful days behind the wheel of a Subaru race car. Pastrana also spent time successfully racing behind the wheel of a Subaru rally car but starting in May, Travis will hit the track behind the wheel of the new Dart race car, likely bringing with him a fanhood following that dates back through 4 championship seasons in the Rally America Championship Series. This means that not only does Dodge gain the success of Pastrana’s storied career but they also acquire some built-in fans that will likely continue to support the driver in his move from Subaru to Dodge.

Next, having a competitive team in the Global Rally Cross world helps the Chrysler Group motorsports program grow into a new venue that is quickly growing in popularity. The Dodge name has long been associated with successful motorsports teams including the NHRA drag racing world, NASCAR stock car racing, TORC off road truck racing and the drifting world but with the NASCAR teams fading quickly and the general disinterest of the younger generation in NASCAR – this new rally cross team puts the Dodge name in front of an emerging sport with enthusiasts who haven’t seen the Dodge name in their sport before. The NASCAR crowd is getting older and with less interest by today’s younger race fans in the predominantly oval-track events, rally racing brings a higher level of excitement to the fans who want to see more sliding through dirt and flying through the air than they do seeing guys drive in circles for 4 hours. As the rally racing world has grown, it has become more important for motorsports programs like the one involving the Dodge and SRT brands to enter with strong teams, strong drivers and successful cars.

Finally, one of the key reasons why this should matter to Dodge, SRT and Mopar enthusiasts who have never watched a rally cross race is the fact that the SRT logo is slapped all over the Dodge Dart shown in the artwork above on the right. The SRT Group has nothing to do with the production Dodge Dart but there have long been speculations that there is a high performance version of the Dart coming with support from the Street and Racing Technology (SRT) group and to see the SRT brand name so prominently displayed could likely hint to the future existence of the Dart SRT package. Granted, the Dodge Dart SRT4 probably isn’t going to pack 600 horsepower, 550lb-ft of torque and all wheel drive – the SRT involvement with the new Dart rally cross program could be one more hint of a high performance Dart coming in the near future.

David Holt wrote on April 2, 2012 - 10:14pm Permalink
Curious, who did build it if not SRT? Could it be Magneti Marelli who got credit for Avenger rally car?