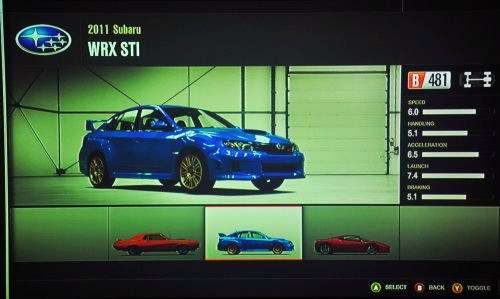 This morning, the gaming world got its first good look at the racing game that looks to set the standard by which all other driving games are judged as Microsoft and Turn 10 Studios put the first playable demo for Forza Motorsport 4 live on Xbox Live for Gold members.
Advertisement

The gaming world has been eagerly anticipating the debut of Forza Motorsport 4 since the first shots of the new simulation racer were unveiled months ago and as the Forza 4 demo has become available on Xbox Live, Gold members finally have the chance to sit back in their favorite chair and enjoy the wonder that is Forza 4. Non-Gold members will get their chance to play the Forza 4 demo on Friday and the world will get their hands on the full version of the game on Tuesday, October 11th.

Based on the demo, the full version of Forza Motorsport 4 will offer five basic modes – Play Career, Community, Quick Race, Rivals and AutoVista – but on the Forza demo just Quick Race and Rivals are available. This is a very brief look at the full game but the demo is more than enough to keep racing gamers planning on calling off of work next Tuesday when the game hits stores around the US. We will have to wait until then for the three modes that are locked on the demo but the Forza 4 Quick Race and Rivals modes are reason enough to have an Xbox Live Gold membership.

Quick Race:
The Quick Race mode of the Forza 4 demo begins by letting you pick between three different vehicles – a 1970 Mercury Cougar Eliminator, the 2011 Subaru WRX STi Sedan and the 2010 Ferrari 458 Italia. Once you pick your preferred vehicle, you pick the color and set your difficulty levels including brake assist, shift assist and the level of opponent difficulty among other things. You are then shipped off to beautiful Lauterbrunnen, Switzerland – located in the heart of the Swiss Alps. In past versions of Forza, the series has been lightly criticized for lacking in graphics compared to the Gran Turismo series but the second that the first panning shot of the Forza 4 demo is shown, it is clear that those issues are nothing but a think of the past. The graphics are spotless in every way, with no lag in the developing horizon even when tearing through the Alps at 200mph in the 458 Italia. Much like the background graphics, the cars are gorgeous and correct down to the smallest detail and unlike GT5, when these cars make contact with other vehicles or track obstacles, the appearance of the cars change as they are damaged. Last, but most certainly not least, is the perfectly fluid gameplay that many of us expected from Forza 4 and Gran Turismo 5 – although the Sony sim racer failed to come through as their gameplay is disconnected and notchy.

Even though you can only select from three vehicles in the Quick Race mode of the Forza 4 demo, this brief look at the new game offers us a look at the selection of vehicles that we will get when the full version hits next week. This mode offers a great look at what we can expect from the Career Mode once we get our hands on the full version of Forza 4.

Rivals Mode:
Next up is the innovative Rivals mode, which requires an internet connection as this is a time trial mode that pits you against a Rival of your choice. If you have friends who also play the Forza 4 demo, the one with the best time for each of the three Rival races will appear as your rival until you beat his or her time in the same identical vehicle. If none of your friends are faster than you, the system will automatically show the Xbox Live gamer with the next best time above yours but you can go into the global leaderboard and select the gamer with the time that you want to target. Once you have picked your rival for the given event, you climb behind the wheel of the specific car that everyone uses for that time trial event and you hit the track. The Forza 4 demo offers three Rival races, all of which take place on the Lauterbrunnen course with three very different vehicles – the Pagani Zonda C, the new BMW F10 M5 and the same Ferrari 458 Italia that we used in the Quick Race mode. The Pagani Rival race has you running on a wide open, empty track while the events for the M5 and the 458 Italia have you racing on a track packed full of (very slow moving) traffic.

Even with just one track option and five cars to drive across the abbreviated two available modes, the Forza Motorsport 4 demo should go a long way in encouraging those who haven’t already pre-ordered the new game to run out and buy it when it hits shelves around the US next week. For years now, the Forza and Gran Turismo games have gone head to head for supremacy of the automotive gaming segment but with the introduction of Forza 4, Microsoft should be able to proudly stand up and say that they offer the pinnacle of automotive video games.

Remember gamers, Forza Motorsport 4 comes out next Tuesday, October 11th and if you hurry, you might still be able to reserve your limited edition version that comes with extra content.