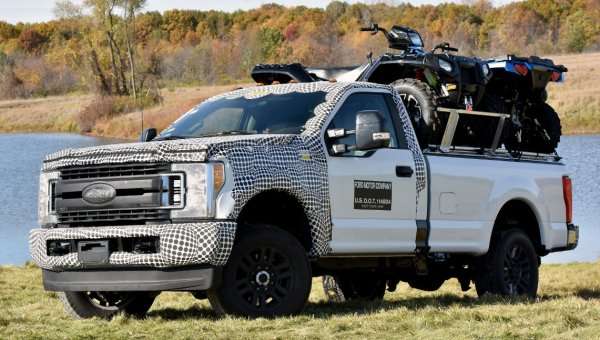 The arrival of the 2017 Ford Super Duty lineup will introduced the next generation of the industry’s bestselling heavy duty pickups and with that debut getting closer each day, Ford Motor Company has offered up a video of the F250, F350 and F450 working out at the Romeo Proving Grounds.
Advertisement

Ford Motor Company has only offered up some scant preliminary details on the 2017 Super Duty F Series pickups, but we know that these trucks will be stronger than the current models and maybe stronger than the competition. Right now, the Ram 3500 is the leader in towing capacity, but with the promise that the 2017 Super Duty will be more powerful and more capable than ever – my safe money says that the next generation F Series Super Duty trucks will be the leaders in their respective segments in those categories which matter the most.

Unfortunately, we don’t have any specific details on the engine output, the towing figures or the towing capacities, but this latest video from Ford shows the 2017 Super Duty working out at the company’s Romeo Proving Grounds in a variety of tests.

Torture Testing the 2017 Super Duty
While the video below and the accompanying release doesn’t include any details on the trucks being tested, we see the 2017 Ford Super Duty with a variety of bed, cab and trimline configurations. Based on the appearance of the trucks being tested, the collection of Super Duty pickups includes F250, F350 and F450 configurations performing a variety of tasks.

Like the hot-selling 2015 Ford F150, the 2017 Ford Super Duty pickups will have a cargo box (bed) and cabin shell which are heavily comprised of aluminum. The lightweight panels on the F150 have proven to be more than tough enough to stand up to the rigors of truck work, but the Super Duty trucks will be exposed to even greater levels of abuse. To make sure that the body of the 2017 F250, F350 and F450 can stand up to this abuse, Ford has been running these trucks through tests with a variety of different cargo racks, including those which extend out over the passenger compartment of the trucks. Also, many of these racks connect to the truck on top of the bed rails, and even with the aluminum components which some people like to demonize – the 2017 Super Duty pickups handle the big weight smoothly.

“Ford Super Duty customers depend on their trucks to work hard every day across a variety of jobs,” said Kirk Leonard, vehicle integration engineer for Ford. “We drove prototype vehicles over the durability roads of the Ford Proving Grounds fitted with common aftermarket accessories to test the fitment and capability of our toughest pickup box ever.“