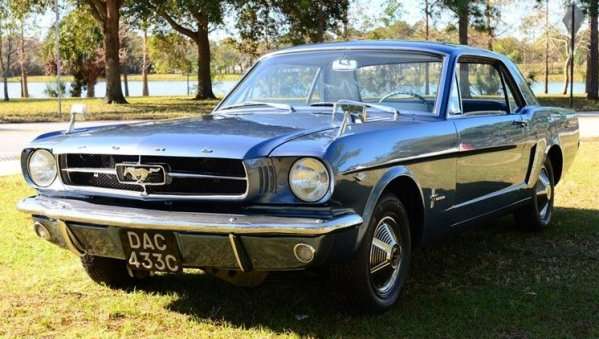 Ford Tested an All-Wheel Drive Mustang back in 1965

When the Ford Mustang hit the market back in 1964 with more success than any car before it or after it, the Motor Company toyed with all sorts of ideas to build on the popular sports car – including an all-wheel drive Mustang test car which still exists today.
Advertisement

When the Ford Mustang went on sale in April 1964, it proved to be the most popular car ever in terms of first day sales. Americans flocked to dealerships to buy the affordable sports car and in the first 24 hours of availability – Ford sold 22,000 Mustangs. The company would go on to sell just shy of 264,000 Mustangs in 1964 and this early success pushed the automaker to look for ways to improve the Mustang and to make it appeal to even more buyers.

The AWD 1965 Ford Mustang
When the Ford Mustang proved to be an instant success when it went on sale in April of 1964, the company quickly began to look at ways to make their new sports car more attractive to more buyers. Around that same time, Ferguson Research of England had developed the first all-wheel drive system for passenger cars and after proving the success of the system in the racing world, Ferguson was looking to introduce their design to automakers.

Ford saw the introduction of an all-wheel drive system as a great way to make the Mustang more attractive to those Americans who lived in areas with heavy snowfall, so the Motor Company worked out a deal with Ferguson Research to build an AWD Mustang. Ford shipped a pair of identical Mustang coupes fitted with the 289 cubic inch V8 engine and an automatic transmission to England where one was converted to AWD by Ferguson and the other was left stock for head-to-head testing.

Not surprisingly, the all-wheel drive 1965 Ford Mustang outperformed the stock car in every situation, with improved acceleration and improved handling – especially on slick roads. The Ferguson system included a planetary center differential with one driveshaft feeding power to the stock differential while another driveshaft sent power to the smaller front differential, with a torque split of 37% to the front wheels and 63% to the rear. This was a full-time system, with clutches allowing the car to turn smoothly with power being sent to all four wheels. As a result, this Mustang would have gotten far better traction in every driving situation, but that rear bias would have allowed the AWD Mustang to have a similar feel to the “normal” 1965 Mustang.

Unfortunately, the Ferguson Research all-wheel drive Ford Mustang never made it past the testing phase and that was likely due to cost. Based on information floating around the internet, a 1965 Ford Mustang hardtop would have started around $2,372, the 225hp, 289 cubic inch V8 would have added $54 and the automatic transmission would have run you around $190, so back in 1965, you could have gotten into the high performance V8 Mustang for around $2,600-$2,700. The Ferguson Research all-wheel drive system would have likely added somewhere in the area of $500, so adding AWD would have effectively increased the price of the Mustang by 19%. Based on modern Mustang GT pricing, that would be like charging $6,400 on a $33k car.

The 1965 Ford Mustang AWD test car from Ferguson Research still exists and as one of the attractions at the Tampa Bay Automobile Museum, you can still check out this cool piece of American muscle car history.