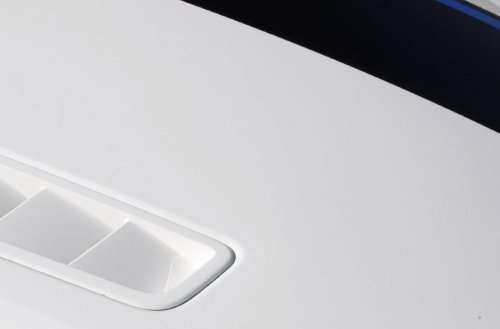 Ford Motor Company released the ultra close up image shown on the right earlier today, proclaiming that they had “big news” at the 2012 SEMA Show and asking fans of their Facebook page to guess what this news might be in relation to what is very likely the hood of some special Ford Mustang.
Advertisement

While the image on the right really doesn’t give us a very good look at the vehicle in question, the object on the left side of the image appears to be the hood vent of the 2013 Ford Mustang GT and Mustang Boss 302 – leaving me to believe that this “big news” pertains to a mighty Mustang. Of course, Ford could just as easily mount the Mustang GT/Boss 302 hood vent onto any other vehicle in the company lineup (especially for a show like SEMA) but unless FoMoCo is playing some crazy mind games with their Facebook fans, common logic would suggest that we are looking at an extreme close up of a Ford Mustang. We can also see a hood stripe that is predominantly black with blue and grey (maybe silver) smaller stripes and it should be noted that these stripes are nothing like those offered on any of the current production Mustangs including the Boss 302.

So what is the big news surrounding the mysterious white Ford Mustang?

It is awfully hard to tell what the big Mustang news could be (provided that it is, indeed about the Mustang) but we can make a variety of guesses based on what little we can see, what we have seen in the past at SEMA and what is hot on the rumor mill. We should keep in mind that this vent is typically found on 2013 Mustang GT and Boss 302 models so I am going to go ahead and guess that this is something packing an American V8. There is the chance that Ford is announcing the use of these vents on non-V8 models but is that really big news for SEMA? No.

The next - and possibly most likely possibility – is that this image is taken of a typical production Ford Mustang GT that has been heavily modified for the 2012 SEMA Show. The real news could be what is under this vented hood, perhaps including new crate engine news or some other addition to the Ford Racing high performance part lineup for the 5.0L-powered Mustang GT. We can expect at least a handful of artfully modified Mustangs at SEMA so this tightly cropped image could just be some massively modified Ford pony car but again…is that big news? No.

Another very likely possibility is that this hood is on some new Ford Racing Mustang model such as the FR500CJ Cobra Jet drag package or the FR500C road race package. This could be anything ranging from a new Boss 302R to a new, more affordable club racer Mustang.
Finally, there are a few possibilities being discussed that are much less likely while being far more enticing to Ford Mustang enthusiasts along with go-fast fans around the country. Either of these possibilities would most certainly be classified by most of the motorsports world as being “big news”.

-It is widely known that the next generation Ford Mustang will come for the 2015 model year with an all new design but for the 2014 model year, the Mustang will be little more than a modified version of the current 2013 Mustang. Perhaps Ford will jump the gun on showing off the final model year of the current Mustang generation…as what venue is better for showing off a new model with a similar look and new power or performance features? Ford could use SEMA to show off the 2014 Ford Mustang to a crowd that would most certainly pay major attention to the car that effectively brings about the 50th model year. However, this information is more likely going to be reserved for a major US auto show – one that is open to the public (unlike SEMA).

-It is also known that the incredible Ford Mustang Boss 302 will be terminated after the 2013 model year with no clear plans of a replacement. Perhaps the hood shown is on some new version of the Boss 302 that focuses a great deal on handling (much like the Boss) but with a different name. In past generations, the Mach 1 name has been brought back for short stints between the Mustang GT and the SVT Cobra/GT500 so perhaps this hood belongs to a new V8 Mustang that will offer somewhere in the area of 450-470 horsepower – making it more powerful than both the standard Mustang GT (420hp) or the Boss 302 (444hp) while still leaving plenty of room for the GT500 to serve as the alpha male of the family.

The 2012 SEMA Show is now just over a week away so in roughly 185 hours, we will known exactly what this hood belongs to and you will too – as TorqueNews will be live in Las Vegas covering the massive automotive convention.

What do you think that this hood belongs to? Tell us in our comment section below!

Anonymous wrote on October 23, 2012 - 8:24pm Permalink
It's the ecoboost stripe with a GT vent so it's likely an ecoboost mustang. Wonder if thats going to be the hook for the 14 mustangs and which ecoboost it will be, 4,6,8 pot...
Mo Animus wrote on October 24, 2012 - 7:52am Permalink
What a stupid name for a Mustang: "Ecoboost". I'm sure to get a reply from Ford's lame marketing department, something like, Well you know, our research confirms that Mustang owners are really really positive about you know, the ecoboost name...blah blah blah. Yeah sure uh-huh. Are you the same numbnuts group that introduced the Edsel, rolled out drivers side sliding van doors and integrated child seats long after everyone else? Are you the same idiots that validated the worst color in the history of 4 wheels, amber gold metallic?
Mo Animus wrote on October 24, 2012 - 7:39am Permalink
I own Ford stock and many family members work there. Problem with the Mustang is the same problem we have with the mindset of Ford Management. The car is getting too big for its' britches. Sales are less that half of what they were 5 years ago. Hello!!! Anyone home???