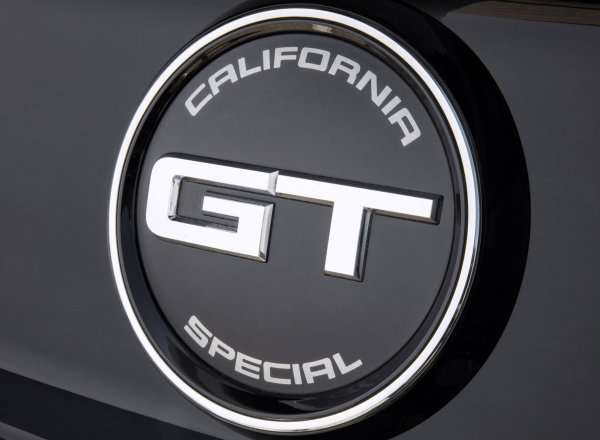 Ford Teases the 2016 Mustang GT California Special - Hints to Others

Ford Motor Company has just issued the image above, showing the rear deck lid badge of the 2016 Ford Mustang GT California Special, which the company states is just one of the new packages coming for the 2016 model year pony car.
Advertisement

So far, Ford Motor Company has been relatively quiet about the 2016 Ford Mustang. We know all that could want to know about the new Shelby GT350, but those details have been specific to the 2015 model year when just 137 units will be offered. We can expect the 2016 Shelby Mustang to be relatively unchanged from 2015, but we don’t know for sure because Ford hasn’t talked much about the 2016 model year – until today.

We can expect that the 2016 Ford Mustang GT California Special will have the rear gas cap badge shown above, revised front and rear fascias, a unique grille, unique wheels, GT/CS badging and some package specific interior appointments. In addition to the features of the California Special package, these special Mustang GT models will come with a great many of the standard features of the GT trimline as well as the 435 horsepower 5.0L V8.

“Just One Of”
The release accompanying the image above of the 2016 Mustang GT California Special was very brief, but it stated that the new GT/CS is “just one of the new packages available on the 2016 Mustang that we know fans of the Mustang brand will love”. We have to wonder if they are simply referring to the GT350 and GT350R in addition to the California Special or if there will maybe be more special edition packages for the 2016 model year.

There have long been rumors that Ford would bring back the Mach 1 package and with the success of the 2013-2014 Boss 302, I wouldn’t be surprised to see either of those names return in the near future – although I have a hard time imagining that they would bring back multiple GT-based trimlines in one model year. Fortunately, we will only have to wait until Monday morning to find out what the Motor Company has planned for their hot-selling muscle car in the coming model year.