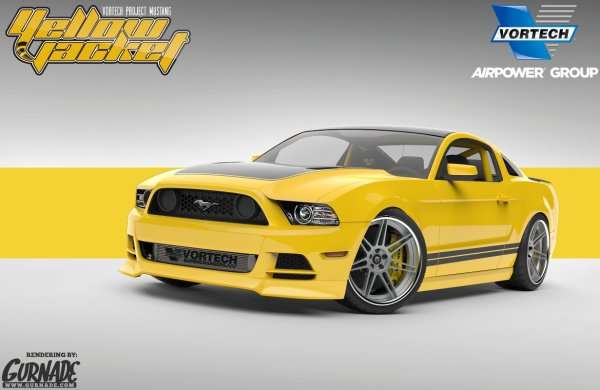 Ford Shows Off the Project Yellow Jacket Mustang Ahead of SEMA

Meet the Project Yellow Jacket Ford Mustang – a joint effort between Ford Motor Company and Vortech Supercharger that is the first of the heavily customized vehicles that will help to fill Ford’s huge display at the upcoming 2013 SEMA Show in Las Vegas.
Advertisement

Each year at the SEMA Show at the Las Vegas Convention Center, the sprawling Ford Motor Company display is packed full of customized vehicles with an obvious focus on the mighty Mustang and today we get our first look at one of those Mustangs. This particular Ford Mustang GT has been modified in cooperation with the folks from the AirPower Group – the parent company of the high performance Vortech and Paxton supercharger brands.

“As a lifelong Ford fan, I was inspired to create this project car when I realized Ford doesn’t offer yellow on the 2014 Mustang,” said Brian Ellis, sales, marketing and social media manager for AirPower Group. “We wanted to create something really eye-popping with a mechanical package to match the appearance.”

The Project Yellow Jacket Ford Mustang is powered by the 5.0L V8 that powers all modern Mustang GTs but thanks to a Vortech V-3 Si supercharger system, this bright yellow Mustang churns out 605 horsepower and 473lb-ft of torque rather than the 420 horsepower and 390lb-ft of torque found in your run of the mill Mustang GT. Further engine modification details are limited but we can expect that this car probably has a free flowing exhaust system and maybe some fuel system upgrades to allow this engine to make all of that power safely.

Finally, we don’t get any details of the Project Yellow Jacket Ford Mustang interior but this sole image above shows seats with the Vortech logo embroidered in yellow on the headrests along with a bright yellow powder coated roll cage. I would also expect that there are some features of this project Mustang has some other goodies to allow the interior to pop on the floor of the SEMA Show.

As an interesting note, it comes as a surprise to me that Ford Motor Company and Vortech opted to call their project car the Yellow Jacket considering that Dodge has a special edition package of the Challenger SRT8 that wears a similar yellow and black scheme with the name Yellow Jacket.

This is our second look at a Ford Mustang headed for SEMA and our first (of what will likely be several) Mustang models that will be featured in the Ford Motor Company display.