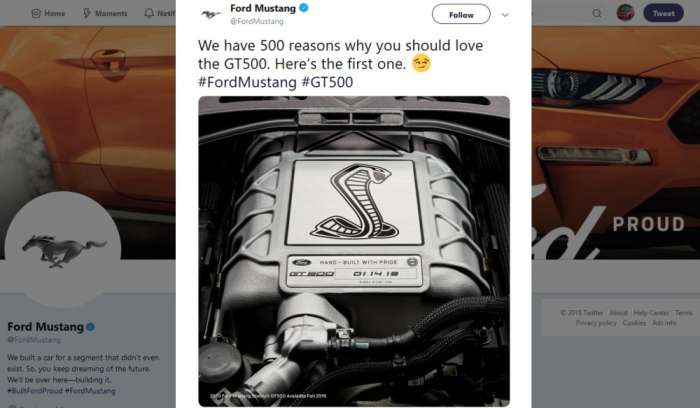 Ford Motor Company shared the image above of the top of the engine of the 2020 Shelby GT500 Mustang along with confirming the debut date and the build location of the supercharged V8 – all while putting the bed the rumors of a factory twin turbo setup.
Advertisement

The image above comes from the Ford Mustang Twitter handle, which is run by Ford Motor Company, and it shows a supercharger lid with the familiar Shelby Cobra logo covering the top. There is also an engine plaque with “Hand-Built with Pride” and “Romeo Niche Line”, along with the date 1-14-19. The caption with the post is “We have 500 reasons why you should love the GT500. Here’s the first one. #FordMustang #GT500”. At the bottom corner of the image, it states that the 2020 Ford Mustang Shelby GT500 will be available in the fall of 2019.

In other words, this picture confirms that the upcoming Shelby GT500 Mustang will be supercharged, the engine will be hand-built at Ford’s Romeo engine plant, it will debut in January 14th, 2019 and it will reach dealerships in a little less than a year from now.

The Supercharged Engine
Almost a year ago, Ford confirmed that there is a new Shelby GT500 Mustang on the way. In the short teaser video that made the future arrival of a GT500 official, we learned that it would pack more than 700 horsepower and some people online insisted that it would reach those power levels by means of a twin turbocharged V8. Along the way, images of what appeared to be a supercharger lid with a Cobra on it surfaced, providing some hope to those who wanted a new supercharged muscle car while others continued to insist that it would be turbocharged.

Thanks to the image above, that debate is put to rest, as the supercharger lid shown above is the same one that we saw this summer, confirming that the 2020 Ford Mustang Shelby GT500 will be supercharged and not turbocharged.

Build Location and Arrival
The Romeo Engine Plant in Michigan built the previous GT500 engines for the 2013 and 2014 model years, so it makes sense that this facility will build the supercharged V8 for the new 2020 Mustangs as well. There are no surprises with the build location, but the date of arrival is likely to be off-putting to some people.

With the debut of the 2020 GT500 being scheduled for the Detroit Auto Show in January, it was assumed that the cars would begin hitting dealerships in the spring. However, a planned arrival date of next fall means that the supercharged ‘Stang isn’t likely to arrive in some places until the winter weather is beginning to hit next year.

This means that from right now, some new GT500 owners still have a year to wait, but with the promise of more than 700 supercharged horsepower, we are sure that this new Mustang will be well worth the wait.