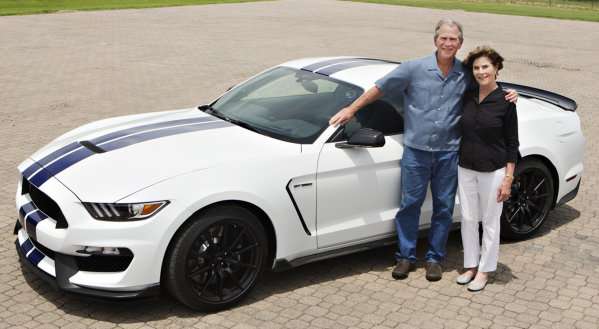 A while back we brought you the news that a 2016 Ford Shelby GT350 Mustang signed by President George W Bush would be auctioned off to support military charity and with Ford Motor Company issuing a release on the results of that auction, we know that the Bush-signed super-Stand raised a whopping $885,000 for charity.
Advertisement

Last month, Ford Motor Company announced that they had teamed up with George W. Bush, Jay Leno and Gooding & Company auctions to auction off a 2016 Shelby GT350 Mustang that had been signed by the former President and serviceman. The GT350 has a sticker price in the $40k range, but when you consider the fact that this car is signed by a great political leader, I expected that it would easily raise at least $100,000 for the military charity group.

The Presidential GT350
While the 2016 Ford Shelby GT350 Mustang being auctioned off will surely be a valued collectable, this car wasn’t “special” in the way that other high profile new-car auctions often are. This auction wasn’t for the very first GT350, so shy of the provenance, it isn’t any different than any other 2016 GT350 Mustang that we will see on the street next year. However, this GT350 was driven by President George W Bush and after driving the 526hp beast, he signed the dash. That was where this car stopped being “special”, but the group responsible for handling the auction went to great lengths to make sure that this car got plenty of attention on the auction block.

First, TV personality and legendary car guy Jay Leno drove the Bush-signed 2016 Shelby GT350 Mustang onto the auction block and with the help of Henry Ford III and Retired U.S. Army Colonel Miguel Howe. Leno and Ford amped up the crowd and helped to keep the bidding battles moving while Colonel Howe did push-ups on the stage to raise addition funds for the Bush Military Service Initiative.

When the final gavel struck, the winning bidder paid a whopping $700,000 for the Presidentially signed Ford Mustang GT350 while Colonel Howe’s efforts helped bring in an additional $185,000 for the charity foundation.

That is a total of $885,000 donated to the military charity as a result of the auction – making it one of the highest priced charity auction cars in recent times. Ford Motor Company’s release did not state who won the auction, but I would guess that it was not a high profile collector, or they would have mentioned that in the release. However, regardless of who wrote that $700k check, they did a great deal for the George W Bush Institute Military Service Initiative.

“We appreciate the opportunity to work with Jay Leno as a part of his efforts to increase awareness and raise funds for the Bush Institute’s Military Service Initiative,” said Henry Ford III, global marketing manager, Ford Performance. “We’re indebted to the courageous men and women who have fought to preserve our freedoms. Providing this Ford Shelby GT350 Mustang – which President Bush drove and signed – is a small token of our gratitude for their sacrifices.”