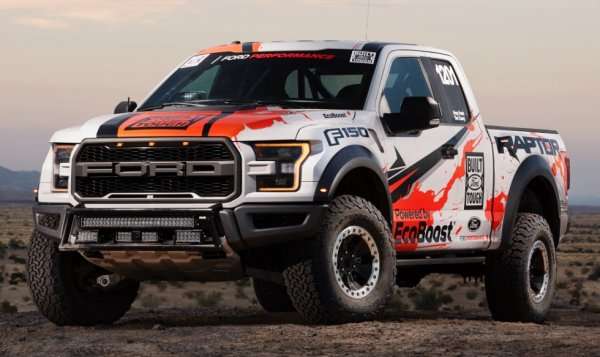 Ford Motor Company has announced that they are sending a 2017 Ford F150 Raptor to the Baja 1000 to run the stock class – a move that helps emphasize the durability of the high performance EcoBoost pickup and all of the supporting modifications which make the Raptor so special.
Advertisement

The 2017 Ford F150 Raptor is slated as the most off-road capable production truck of all time and to show off that the many high performance components are up to the task of taking on the toughest off-road race in the world, the new Raptor will compete in the 2016 Baja 1000 race on November 16th through the 20th. This 631 mile race took the 1st gen Ford SVT Raptor F150 25 hours, 28 minutes and 10 seconds back in 2008 to finish 3rd in the class 8 stock class, but for the 2016 race – the Ford team will be looking for the newest F150 Raptor to turn an even quicker time.

The 2017 F150 Raptor Vs Baja
the 2017 Ford F150 Raptor competing in the 2016 Baja 1000 will be campaigned by Foutz Motorsports and with the exception of the roll cage, a fuel cell, racing seats with racing harnesses and a full complement of LED lights on the outside, this Raptor is stock. It should be noted that all of those features above add weight and to compensate for that weight, the suspension setup has been adjusted to maintain the same level of performance as a stock-weight truck.

This 2017 F150 Raptor will be running the stock rims wrapped in the stock BFGoodrich K02 tires, the stock body and the stock drivetrain, including the new 3.5L EcoBoost V6 which was designed specifically for this new Raptor. It delivers 450 horsepower and 510lb-ft of torque, making it significantly more powerful than the previous generation Raptor with the SVT V8. Add in the lighter aluminum body, the stronger chassis, the new 10-speed automatic transmission, the new advanced four wheel drive system and the new wheel/tire combo – all of which is unchanged for the Baja 1000 race – and you have a new F150 that could challenge for the class win.

It should be noted that the new Raptor features a special “Baja” driving mode, which keeps RPMs high and turbo boost levels where they need to be in order to make sustained, peak power. When combined with all of the features mentioned above, it seems very likely that this new Raptor will turn in a better time than the 1st gen Raptor, but this event isn’t necessarily about winning.

Ford uses data compiled from things like the Baja 1000 to improve future trucks, as once a truck has been built to stand up to the abuse of the world’s most extreme off-road race – it can easily stand up to the worst that most normal drivers can throw at it.

In addition to the announcement that the 2017 F150 Raptor will be racing at Baja, Ford offered up the short video below to give us a quick look at the truck that will be racing later this month.