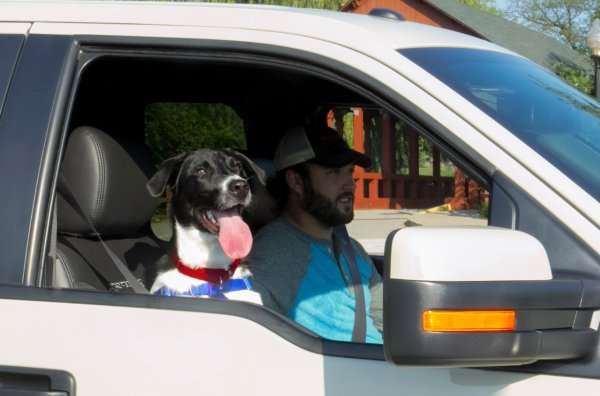 Ford Reminds Truck Owners That Dogs Should Ride Inside

Ford Motor Company and the American Humane Association have teamed up to remind truck drivers that dogs should always be transported in the cab of a truck and not in the bed – no matter how much your pooch appears to be enjoying the open air cruise out back.
Advertisement

Ford Motor Company and the American Humane Association put together a list of pointers to help keep your four legged best friend safe and sound during rides in your truck (and car, in some aspects).

“As America’s truck leader, this is an issue that’s close to the heart for us,” said Doug Scott, Ford Truck Group Marketing Manager. “We’re not asking that people go to onerous lengths while driving with pets, but even the smallest steps can make a difference in keeping all passengers in our vehicles safe.”

First off, for pickup truck owners, Ford and the AHA remind us that dogs should never be transported in the open bed of a truck. While the dog might appear to be having a great time, having Fido ride in the bed could prove to be a deadly decision. It is estimated that around 100,000 dogs PER YEAR are killed by accidents resulting from the pets being allowed to ride in the bed while the truck is in motion. Some dog owners insist that their dog is fine in the bed and that nothing will happen but even the best dog can occasionally be distracted enough to leap from the bed of a moving truck. Also, in the event of an accident, the bed is the least safe place for anyone to be with the lack of safety features – which is why people arent allowed to ride in the bed either.

“It is estimated that 100,000 dogs die each year riding in truck beds” said Dr. Robin Ganzert, president and CEO of American Humane Association, the country’s first national humane organization. “Unfortunately, we have all seen dogs riding in the bed of a pickup truck, which is an extremely dangerous way to transport your pet.”

Ford Motor Company also points out that in addition to having your dog ride in the cab of your truck, he or she should always be seated in the back seat when possible (even though the Ford image above shows a dog in the front seat). This also applies to cars, SUVs and other vehicles as having the dog in the front seat can distract the driver from paying full attention to the road and in the event of an accident – a dog being hit with the passenger side airbag can have severe consequences. For many of the same reasons that young children should be seated in the back seat, dogs should be kept there as well.

Along the same lines, Ford and the American Humane Association point out that dogs also shouldn’t be allowed to ride in a moving vehicle with their head out the window. While that image has become an icon in American motoring, this can cause a variety of injuries stemming from debris kicking up and hitting the dog in the eyes to the high speed wind irritating the dogs eyes and sinuses to the worst case scenario –the dog falling out of the open window. While it is fine to crack the window to let your dog stick his or her nose out for some fresh air, anything more leads to increased risk to your dog’s health.

Finally, Ford reminds us that a dog should never be kept in any vehicle for long periods of time – especially in extreme temperatures. A dog can very easily overheat when left unattended in a hot car or truck, even with the windows cracked and even only if for a short period of time.

To help spread awareness about the risks of how and where you transport your dogs, Ford will sponsor a month long adoption drive and pet safety tour that stretches from Los Angeles to Chicago in conjunction with the folks from Fido Friendly magazine. The tour is named “Get Your Licks on Route 66” and with 15 stops along the route, Ford helps to build on the success of this tour over the past four years. As the tour enters its fourth year, the series of events across the country have helped find homes for more than 1,500 animals. You can get more information on the tour by going to Fidofriendly.

LG's New EV Battery Plant Is a Welcome News for Tesla
Tesla Giga Berlin's New Hurdle: It's Not Only the Gov't, but Now Tesla Itself
END_OF_DOCUMENT_TOKEN_TO_BE_REPLACED