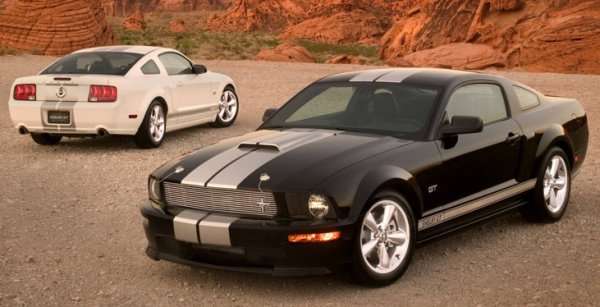 Ford Motor Company has added more than a half million cars to the massive Takata airbag recall, many of which are Ford Mustang models from the 2005 through 2008 model years – all of which have the airbags that could cause major injury or death if the assemblies fail in the event of an accident.
Advertisement

If you follow the auto industry at all, you probably know that a great many automakers doing business in the United States are dealing with a massive recall of airbags made by the supplier Takata. Ford has previously recalled about 55,000 cars that were initially sold in areas with high humidity, but now that the Takata airbags have failed in other areas originally not associated with this problem, the NHTSA has pushed automakers to expand these recalls. In accordance with the NHTSA’s wishes, Ford has expanded the airbag recall in a big way – adding more than a half million Mustang and Ford GT supercars to the recall.

The Ford Mustang Takata Airbag Recall
When the Takata airbag problem was first realized, the failure seemed to be caused by corrosion due to extremely high humidity, so the initial issue only affected those vehicles which were currently registered or which had previously been registered in high humidity areas like Florida. Unfortunately, the National Highway Traffic Safety Administration learned of Takata airbag failures in cars that were not or had not been in those humid areas, so the feds are looking to have more vehicles with these dangerous airbags recalled for replacement.

The Recall Explained
This Takata airbag recall has reached a wide variety of vehicles across various segments (including my own Dodge Ram pickup). In all of these vehicles with Takata airbags, high humidity could cause accelerated corrosion in the airbag assembly. Should this corrosion damage become severe enough, the backing plate of the airbag system could fracture when opening – shooting shrapnel at very high speed towards the face, neck and chest of the driver in the event of an accident.

Fixing this problem is as simple as the dealership replacing the questionable airbag modules and while I’m not sure how long it takes to replace the driver’s side airbag in the Ford Mustang, the recall for my truck states that the fix takes about two hours. Of course, the work will be performed free of charge and based on the possibility of serious injuries – this is a recall that owners should take seriously.