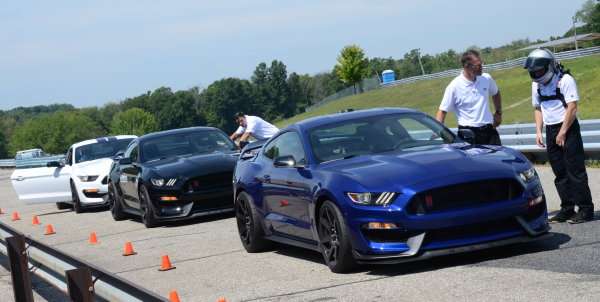 Ford Motor Company has issued a recall for more than 8,000 examples of the new Shelby GT350 and GT350R Mustang over a concern that a portion of the engine oil cooler could fail – leading to engine failure or an engine bay fire.
Advertisement

The 2015, 2016 and 2017 Ford Shelby GT350 Mustang is the most capable muscle car on the market when it comes to road course racing, especially in GT350R form, but it seems that a component of the engine oiling system could fail – leading to engine failure or an engine bay fire. Because of that, Ford has issued a recall for more than 8,000 Shelby Mustang coupes around the world to address this issue.

It should be noted that there have been no reports of fires or accidents associated with this issue, but to make sure that they keep it that way – Ford is getting the GT350 and GT350R Mustangs back to dealerships for repairs.

The Shelby Mustang Recall Detailed
The 2015-2017 Ford Shelby GT350 and GT350R Mustang is fitted with a unique 5.2L flat plane V8 engine which delivers 526 horsepower, but more importantly, the newest Shelby Mustang features an engine protection system to keep that high performance mill running cool for long periods of time on the track. Part of that system is an engine oil cooler and unfortunately, it seems that the lines running to that auxiliary oil cooler could lead.

This risk is particularly high when the Shelby Mustang is being raced, as the engine bay would be at its hottest and oil pressure would be at its highest, so a sudden oil leak could lead to one beast of a fire.

Again, Ford has not received a single report of an engine bay fire in a new Shelby GT350 or GT350R Mustang, but to stay on the safe side, they are recalling these vehicles to replace those troublesome engine oil cooler lines. This work will be performed free of charge to the owner, of course.

The recall notice specifies that “certain” Shelby Mustangs are affected, so this recall might not reach every GT350 and GT350R from those model years, so if you own a new Mustang with the flat plane V8 and you are concerned about your engine oil cooler – check with your local Ford dealership for more information. Once you provide the dealer with your VIN, they will be able to tell you whether or not your Mustang is included in this recall.

Ernie wrote on December 21, 2016 - 4:00am Permalink
FORD has not fixed this recall for months now. A GT350R just burst into flames in Las Vegas driving on the highway. More than 1 GT350 has caught fire. Google it...

LG's New EV Battery Plant Is a Welcome News for Tesla
Tesla Giga Berlin's New Hurdle: It's Not Only the Gov't, but Now Tesla Itself
END_OF_DOCUMENT_TOKEN_TO_BE_REPLACED