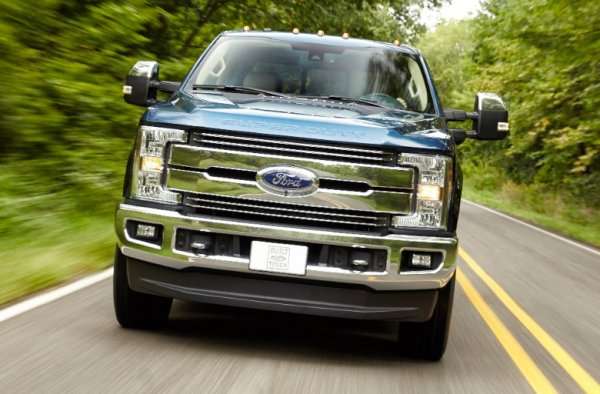 Ford Motor Company has issued a recall for roughly 52,600 2017 F250 Super Duty pickups over a concern that the trucks could rollaway when the vehicle has seemingly been left in park – increasing the likelihood of an accident if one of the big Ford trucks gets to rolling down the street without a driver.
Advertisement

Ford Motor Company has issued a recall for the new 2017 Ford F250 Super Duty pickups powered by the 6.2L gasoline engine over a concern that it could roll away when the driver shifts to park and leaves the vehicle. As you might imagine, having a 6,000lb Super Duty coasting down the street or through a neighbor’s yard poses a very real threat of causing an accident or injury should it hit anything. Because of this possible rollaway risk, the Motor Company is getting all of these trucks back to the dealership for repairs.

2017 Ford F250 Transmission Recall
This new recall pertains specifically to 2017 F250 pickups powered by the 6.2L, gasoline V8 and the 6-speed automatic transmission. In these trucks, there could be a damaged park rod actuating plate in the transmission and a truck with this problematic component might not fully shift into Park when the driver moves the shift level to Park. Instead, the shifter will indicate that the F250 is in Park, but the mechanical components in the transmission could fail, leaving the truck in a moving gear.

Should a 2017 Ford F250 with the damaged park rod actuating plate be parked on a grade and the transmission does not mechanically go into Park, the truck could roll away once left unattended. Ford points out that this problem can be completely avoided simply by using the parking brake, but with so many careless drivers pointlessly ignoring the parking brake – the chances of this problem are higher than they should be.

Fortunately, Ford points out that there have been no accidents or injuries caused by a free-rolling 2017 F250 Super Duty, but with the possibility of a runaway heavy duty pickup – the company is making the quick move to get these trucks back to dealerships for repairs.

The owners of these 2017 F250 pickups will be contacted by Ford and asked to bring the truck to their local dealerships for repairs. Once there, a technician will inspect the park rod actuating plate for proper function and if something isn’t right – they will replace the part, free of charge.