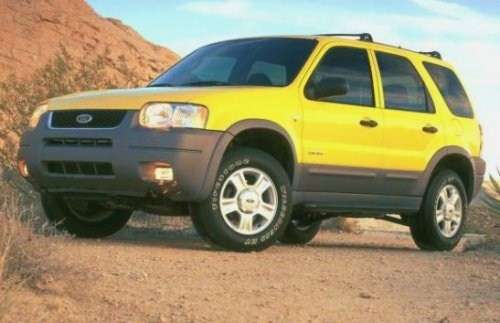 Ford Motor Company has announced a new recall of select Ford Escape SUVs from the 2001 through 2004 model years over a concern that these vehicles may have sustained damages during previous recall work that could cause the dreaded unintended acceleration.
Advertisement

The Center for Auto Safety issued a similar statement demanding that the 2002-2004 Mazda Tribute also be recalled as it is mechanically identical to the Escape and was subject to the same recall in the mid-2000s. Mazda has not yet issued a recall of their own for the unintended acceleration concerns stemming from the earlier accelerator cable recall.

In addition to the Center for Auto Safety issuing a statement demanding that Ford re-recall the 2001-2004 Ford Escape SUVs and the 2002-2004 Mazda Tribute, the National Highway Traffic Safety Administration opened a preliminary investigation after receiving 99 complaints (68 ford Escape owners, 31 from Tribute owners) that resulted in 13 crashes and 9 injuries. One of those incidences occured in January 2012, when a 2002 Ford Escape driven by 17 year old Saige Bloom crashed in Arizona – killing the young girl. The cause of the accident was ruled to be sudden unintended acceleration stemming from a cruise control cable that had been damaged when it was repaired in January of 2005.

The new Ford Escape recall is set to begin on or before August 6th 2012, at which point Ford will ask owners to return to their local Ford dealership where the clearance between the engine cover and the accelerator cable. Ford expects that the parts needed to fix the 485,000 troublesome Escape SUVs will be available by mid-August and until those parts are ready – the dealership will apply a temporary fix of disconnecting the cruise control cable.

The statement from Ford Motor Company made no mention of the 2002-2004 Mazda Tribute but with the NHTSA already investigating those Ford-built Mazda SUVs – we should expect that those vehicles will soon be recalled as well.