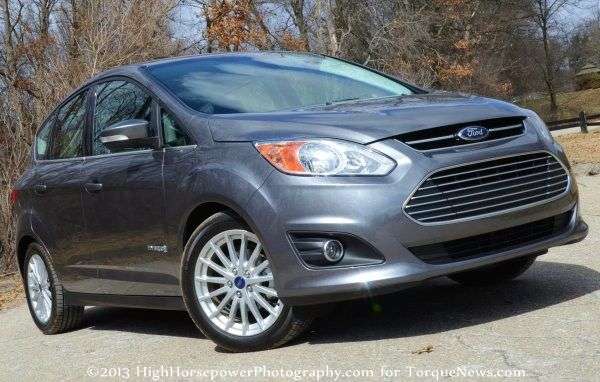 Ford Motor Company has announced a voluntary recall of Ford Focus Electric and Ford C-Max models because the driver’s side door ajar chime does not conform to Federal Motor Vehicle Safety Standards – a problem that could technically lead the car being stolen if the driver leaves the key fob in the vehicle.
Advertisement

This new Ford Motor Company “door chime recall” pertains to 2012 and 2013 Ford Focus Electric hatchbacks along with 2013 Ford C-Max Hybrid and Plug-In models, all of which are fitted with push button start. Federal Motor Vehicle Safety Standards mandate that vehicles with push button ignition systems have a chime that sounds whenever the driver’s door is open and the key fob is inside of the vehicle. In a vehicle without push button start, this door chime activates when you put the key in the ignition slot but since there is no ignition slot in the Focus Electric, C-Max Hybrid and C-Max Plug-In, those vehicles should have a chime that sounds as soon as the key fob enters the cabin and until the driver’s door closes. This chime also rings when the driver’s side door is opened while the vehicle is running which is beneficial since it these vehicles don’t make any sound when the car is in “running”.

Unfortunately, it seems that these 23,800 Ford Focus and Ford C-Max vehicles do not have said chime and that could lead to a variety of problems – most notably making it easier to steal the car in question if the key fob is left in the vehicle. Should the driver get in the car and start it up to drive to work, sticking the key in the center console or in a cup holder only to get to work and forget to grab the key out of the center console, the driver’s side door chime is designed to remind the driver that the fob is in the vehicle. However, without that door chime functioning correctly, the driver could walk away from the car with the key fob lying in the cup holder. Should some opportunistic crook walk by and see the key fob in the car, there would be nothing preventing him or her from getting in the car and driving off. Needless to say, having the driver get out and walk away from the car when the push button start has been activated also poses a theft risk since in that case, the crook wouldn’t even have to push the button to steal the car.

Fortunately, fixing this problem is as simple as getting these vehicles back to the dealership where the software that controls the door chime in the Ford Focus and C-Max hatchbacks will be reprogrammed so that the chime operates as it should when the driver’s door is open with the key fob inside and when the push button start is activated.

Of the 23,831 Ford Focus Electric, Ford C-Max Hybrid and Ford C-Max Plug-In hatchbacks affected by this recall, roughly 22,900 are located in the United States while the other 900-ish fuel sipping Fords are located north of the US/Canadian border. Ford has not offered a breakdown for this recall by model but we can expect more specific numbers once this recall has appeared on the federal government’s SaferCar.gov website. Of course, that is dependent on the US government getting their heads out of their rear ends and getting back to work since the SaferCar.org website is just one of the portions of the US government that is currently shut down due to the financial crisis.

This might seem like a silly recall but with the number of push button start equipped cars being sold every day leading to more absent minded morons talking on their phone as they get out of the vehicle, the likelihood of the key fob being left in the car or the car being left in the run mode can quickly become a bigger problem…which is just one of the reasons why the federal government has requirements like the one forcing this recall in place.