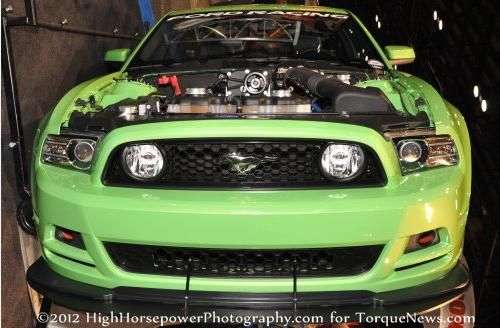 When the Gotta Have It Green paint option for the 2013 Ford Mustang GT debuted in public at the 2011 PRI Show in Orlando, that vehicle was actually Ford’s Racing’s new project car (an unknown fact at that time) but thanks to the folks at Mustangs Daily – we now have the full details on this new high performance Mustang built strictly with parts from the Ford Racing catalog.
Advertisement

When we first met the 2013 Ford Racing Mustang GT project car, it was perched precariously on its side at the 2011 Performance Racing Industry Trade Show in Orlando. Interestingly, when this Gotta Have It Green 2013 Ford Mustang GT debuted at PRI, it appeared to have already been packed of Ford Racing goodies but that is the case with almost any vehicle on display at a performance show. Because of that, many passed this heavily modified Mustang GT as ‘just another show car’ but it turns out that this is actually Ford’s newest high performance project. Best of all, since literally everything on the car comes from the Ford Racing catalog – any new Mustang GT owner can build this beast right at home.

Ford Racing started with a 2013 Ford Mustang GT Premium Coupe powered by the revamped 5.0L V8 – packing 420 stock horsepower and 390lb-ft of torque (also in stock form) – but this Mustang GT is far from stock. To enhance the performance, Ford Racing has added their own street legal supercharger package featuring a 2.3L Whipple supercharger unit, a Ford Racing aluminum radiator kit, Ford Racing quad outlet exhaust (a similar setup to what is found on the Boss 302 with both side and rear exit exhaust) and an engine oil cooler. The folks from Ford Racing haven’t stated just how much power they are making with this project car but the Ford Racing/Whipple 2.3L supercharger package alone is good for 624 horsepower – so we can guess that right around 625 is a good estimate as to the kind of horsepower being made…if not more. This power is channeled through a 6-speed manual transmission featuring the cooling air scoop from the Boss 302 and out back, there is a set of 3.73 gears set in a heavy duty 8.8” Ford reared, helping to make the most of all of that power.

On the outside, the Ford Racing project car begins with that gorgeous Gotta Have It Green paint code that has been introduced for the 2013 Ford Mustang, adding the gloss black 19” wheels from the Mustang Track Pack wrapped in high performance Pirelli tires and the adjustable front splitter from the Boss 302 Laguna Seca package. Inside, this 2013 Mustang GT features all of the gadgets and goodies that you can get on a fully loaded GT Premium Coupe, including a Sync activated entertainment system with a large touch screen, the 4.2” message screen in the gauge cluster, leather seating and a high performance Shaker 500 sound system.

Where the 2013 Ford Racing Mustang GT project car really differs from the standard production Mustang GT is the handling capacity and in digging deep through their own catalog; Ford Racing has shown how seriously an owner can be about making their Mustang handle as well as just about anything on the road today. This begins with the Ford Racing Handling Pack, adding Ford Racing Dynamic shocks and struts, 1” lower springs, front and rear anti-roll bars and Ford Racing jounce bumpers. Next, the braking system was totally overhauled with Ford Racing parts with help from the stopping authorities from Brembo. This braking package adds Brembo 4-piston front calipers with high performance brake pads wrapped around massive 14” rotors, with a brake cooling ductwork package borrowed from the Boss 302 Laguna Seca helping to cool down these big binders.

We can expect to see the Ford Racing 2013 Mustang GT project car at the various shows around the country but with what is realistically very little work done outside of a substantial suspension overhaul – this Mustang GT isn’t that different from the ones sitting on your dealership lots right now. Those of you who own a new Mustang and would like to make a super-Mustang of your own based on this one will find a part number list located below – all of which can be found in the Ford Racing catalog. We went through and added up the cost of all of the key functional components and for the supercharger package, the brakes, the main suspension package and the Boss 302 style exhaust system you will be looking at a cost of roughly $12,457 before many of the smaller items. This also doesn’t include installation so this Ford Racing build in your own garage will be costly but when finished – there is no doubt that you will have one nasty-fast, street legal 2013 Mustang GT.