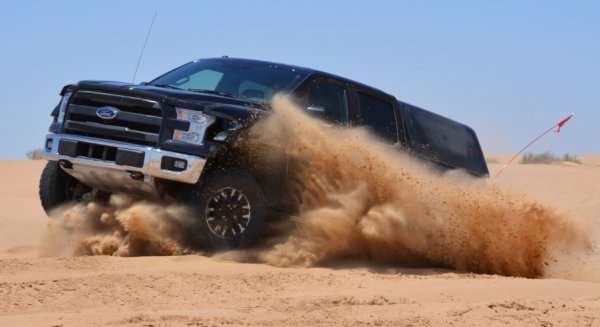 While Ford Motor Company has continued to hold back all of the key details of the 2017 SVT Raptor F150, the automaker recently issued a brief statement explaining that the newest Ford sport truck has completed over a thousand miles of desert testing – and it did so with flying colors.
Advertisement

The 2017 Ford SVT Raptor F150 should be the most off-road capable production street truck ever sold in the United States when it arrives sometime next year. With that in mind, Ford knows that a great many 2017 Raptor owners will take their rough and rugged F150 into some of the most punishing conditions on Earth, so prior to sending these trucks out into the real world, Ford is putting the Raptor through the roughest conditions that they can come up with – including a lengthy, high performance test session in the deserts of the American southwest.

The goal was to find the worst conditions possible and push the 2017 Raptor F150 to the outer limits of its capabilities, and after more than 1,000 miles of high speed, high flying action, the new Raptor is one step closer to being ready for public consumption.

2017 Raptor Desert Testing
While the 2017 Ford SVT Raptor F150 will likely be tested by owners in a long list of real world settings, there are arguably few situations that can take a greater toll on a vehicle than extended periods of high performance driving in very hot temperatures. Add to that extreme heat some loose, sandy footing and a collection of jumps, and you have yourself the most abusive scenario for an off-road performance truck. Fortunately, the deserts of the American southwest are ideal proving grounds for testing under these types of conditions and Ford Motor Company recently spent a few days with a handful of next generation Raptor F150 pickups in those deserts, pushing the new SVT pickup to its limits to make sure that it could handle this grueling workout.

Since the 2017 Ford SVT Raptor F150 doesn’t actually exist yet, Ford’s test team took a handful of prototype trucks which were comprised of a mix of 2015 F150 production trucks and 2017 Raptor prototype components. Ford doesn’t go into much detail, but I would expect that they took a 2015 F150 and added all of the components that make the Raptor special – including the high performance 3.5LM EcoBoost V6 and the new 10-speed automatic transmission.

The Procedure
Ford hasn’t offered up a full rundown of what the 2017 Raptor F150 test trucks were exposed to, but we know that they logged more than 1,028 miles on desert trails designed to copy the grueling Baja 1000 off-road race in Mexico. This faux race course contains every sort of hazard that a race truck would face while battling Baja, but the new F150 handled the worst that the desert had to offer in street trim. During the course of the desert testing, speeds reached over 100 miles per hour and compared to the previous generation Raptor F150 – the new Raptor completed the test course some 25% faster than the outgoing models.

Finally, as the testing was about to finish, Ford hurdled the new Raptor F150 at a tabletop jump that tossed the truck a few feet into the air before slamming down – an action which caused frame problems with the previous generation SVT Raptor.

Now that the desert testing is complete, Ford will continue to put the 2017 Raptor through the paces, leading up to a debut sometime later in 2016.