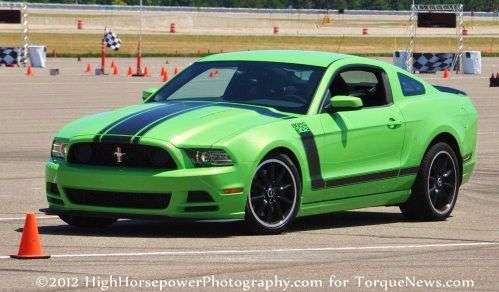 For the third time in 2012 and the second month in a row, the Ford Mustang was the top dog in terms of muscle car sales in the US market in June - posting the second best month of the year and beating the Chevrolet Camaro and the Dodge Challenger.
Advertisement

The Chevrolet Camaro started the 2012 year the same way that it ended 2011, leading the muscle car segment three times in the first four months but the Ford Mustang has battled back, leading the segment in both May and June. More importantly, the Mustang’s strong back to back months has allowed the Ford pony car to climb back within reach of the Camaro in terms of annual sales as FoMoCo tries to prevent GM from claiming the top sales in the muscle car segment for a third year in a row.

The Ford Mustang moved 10,263 coupes and convertibles in June 2012, accounting for a 16.2% increase over the 8,835 Mustangs sold in June 2011. The Mustang has seen an improvement in sales over these past two months with 22,690 units sold, coming from both the 2012 and 2013 model year. This increase in sales is likely due to a variety of factors, the greatest of which being the GT500-like front end applied to the entire 2013 model lineup and the slight increase in horsepower among Mustang GT models. During the first half of 2012, Ford has now sold 48,624 units – an increase of 25% over the first six months of 2011 but the Blue Oval muscle car is still sitting at second place in terms of 2012 annual sales. Based on the current monthly sales rate of 8,104 units, the Mustang is on pace to sell roughly 97,248 units in 2012…although the Mustangs monthly average sales rate has increased each of the last two months. Unfortunately, the average per month sales of the Mustang will likely drop later this year so the projection of 97k+ Mustangs could prove to be a bit on the high side come the end of 2012.

The Chevrolet Camaro was the second bestselling muscle car in the US in June 2012 with 9,123 coupes and convertibles sold last month. This presents a 7.5% increase over the sales of the Camaro in June 2011 but Chevrolet still fell short of the Mustang last month by over a thousand units. On the year, the Camaro has moved 49,697 units which accounts for an increase of just 1.9% compared to the first half sales volume in 2011. While the Camaro has posted the smallest growth of the Detroit Big 3 muscle cars, it still holds a lead in segment sales for the 2012 calendar year. With a current monthly rate of 8,283 Camaro coupes and convertibles sold each month, GM is on pace to move just under 100,000 muscle cars this year. As is the case with the Ford Mustang, the Chevrolet Camaro has seen its average monthly sales rate increase over the past few months but as we get through the summer and head into the colder months, muscle car sales will likely dip a bit.

The Dodge Challenger had one of its less successful months in June 2012 but with 4,009 units – the brawny Mopar muscle car continued its consistent sales rate. This number presented an increase of 18% over the 3,384 Challengers sold in June 2011 and with 23,451 units sold through the first six months of the year, the Challenger has grown by 16% over the first half of 2011. The Challenger routinely falls short of the Camaro and Mustang in terms of monthly sales figures but the folks at Chrysler are perfectly happy with the consistent sales rate of the Challenger. The Challenger is averaging 3,909 units sold each month which (in a perfect world) could lead Chrysler to sell roughly 46,900 brawny muscle cars in 2012.

The biggest news in the American muscle car segment is the fact that the Ford Mustang is now just over 1,000 units behind the Chevrolet Camaro in annual sales. Since being introduced in 2010, the Camaro has bested the Mustang in annual sales but with each of the two muscle cars taking 3 of the first 6 months of 2012 – we appear to have a real battle on our hand as we head into the 3rd quarter of 2012. If Ford can put together another 10,000+ unit month for the Mustang in July 2012 and GM fails to improve on their current rate; the Mustang could reclaim a segment lead that they haven’t held in almost two years.