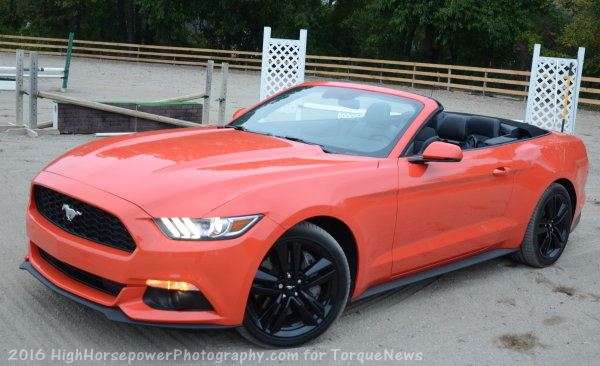 We reported earlier this week that the Ford Mustang had claimed the bestselling muscle car title for 2015 and now that we have had time to dig through the numbers from around the industry, we can officially say that the mighty Mustang leads all 2-door sporty cars sold in the good ol’ USA.
Advertisement

For examples, the Fiat 500 Abarth is an awesome little 2-door and it is clearly performance-minded, but it is only a small part of Fiat 500 sales so as a whole – the 500 is more of an economy car than a sporty car even though there is a great high performance package offered. Also, the Hyundai Genesis Coupe would likely appear on this list, but the company doesn’t split coupe and sedan sales, so that model has been excluded from the top 20. The same is true of all models which automakers don’t separate different body styles.

Finally, my intention was to cut the list off at vehicles that didn’t move more than 500 units, but that would have left us with 19 cars and the Audi R8 was oh, so close…so we let it slide into 20th with 495.

The Bestselling Sporty Coupes in America
Of course, with more than 122,000 units sold in 2015, the Ford Mustang is by far the bestselling sporty car in America. The Chevrolet Camaro and Dodge Challenger should be an unsurprising 2nd and 3rd while the Chevrolet Corvette ranks 4th. The first big surprise on the list is the Lexus RC, which ranked 5th overall in the first full year of sales with more than 14,000 units sold. This is an impressive figure for the RC, but Lexus will need to sell more than double that number to catch the Corvette and move into 4th on the list for 2016.

In 6th place we have one of the most affordable cars on the list with the Scion FR-S, which finished 5th on last year’s list and in 7th place is the duo of the Porsche 911 and 918 (Porsche groups the sales together due to the similar chassis platforms).
The introduction of the new Mazda Miata helped the compact roadster to jump up into 8th on the list after finishing 11th last year while the Nissan 370Z and the Porsche Boxster/Cayman rounded out the top ten. The Subaru BRZ finished 11th on the list this year and the Infiniti Q60 came in 12th after a big drop in sales from 2014 to 2015.

In 13th we have the only vehicle on the list with a non-traditional powertrain, as the BMW i8 moved enough units in its first full year to rank above some heavy hitting performance cars and the sporty little BMW Z4 finished just behind the electric supercar in 14th. Another newcomer and the only Mercedes on the list comes in the form of the AMG GT, which finished 15th overall, and the Audi TT finished just behind the Benz in 16th.

The Nissan GTR saw sales drop in 2015, but the enough Godzilla cars were sold to grab the 17th spot on America’s bestselling sporty cars while the Dodge Viper finished just ahead of its new cousin, the Alfa Romeo 4C. Finally, the Audi R8 rounds out our top 20 sporty cars in America and you can find the complete list with sales figures below.

Congratulations once again to the Ford team for not just winning the sporty car sales race – but absolutely crushing the competition.