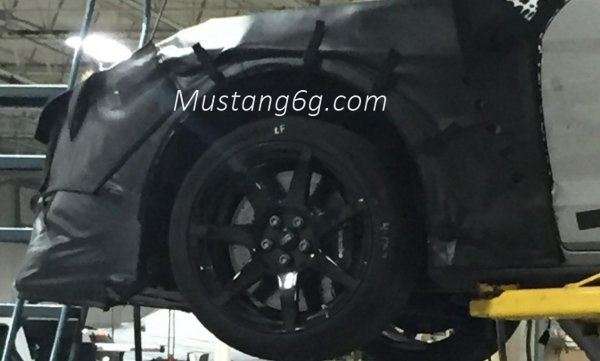 Spy shots revealing what appears to be a Ford Shelby GT350R Mustang with more extreme aero bits could reveal something as simple as upgrades for the GT350 line, or they could be the best shots yet of the rumored Shelby GT500 Mustang.
Advertisement

The folks at Mustang6g.com have proven to be the authority on inside information on the newest generation of the Ford Mustang and this time, the community has rolled out some pretty interesting images. A member of their forum posted images which reportedly come from inside a Ford Motor Company facility and in these images we see what appears to be a Shelby GT350R Mustang test mule, but there are a handful of features which make this car unique from the current GT350R.

These differences – which we detail below – suggest that the Motor Company is either working on a more extreme aerodynamics package for the Shelby GT350R Mustang, or they are using GT350R Mustangs as test mules for the long-rumored Shelby GT500. In any case, it certainly looks as though Ford is cooking up something special for the Shelby Mustang.

The Mystery Shelby Mustang
In these spy shots (which you can check out over at Mustang6g.com), the camouflaged Ford Mustang appears to be a Shelby GT350R model. It has the carbon fiber wheels and the monster Brembo brakes from the current Shelby models, but it has a heavily masked front end and a larger rear spoiler which looks to be adjustable. The front fascia is covered with the thick black cladding so we can’t really see what is going on up front, but we can see in one of the images that this Mustang has louvers in the fenders above the front wheels. Finally, this mysterious Mustang has a hood wrapped in the thick black camo, but in one image where the hood is closed, it appears to have more of a bulge to it than any standard Mustang hood right now.

So this Ford Mustang has a covered front fascia (suggesting that it is unique from current production designs), a hood which looks to have more of a bulge than current production models, fender vents that we have never seen on any road-going Mustang and a rear spoiler that looks to be a bit more extreme than the Shelby GT350R wing – but why?

There are a few possible reasons why this Ford Mustang exists.

We have only included this closely-cropped image which shows the least detail, as we don’t want to steal Mustang6g’s thunder, but you can check out all of the images on their forum by clicking here.