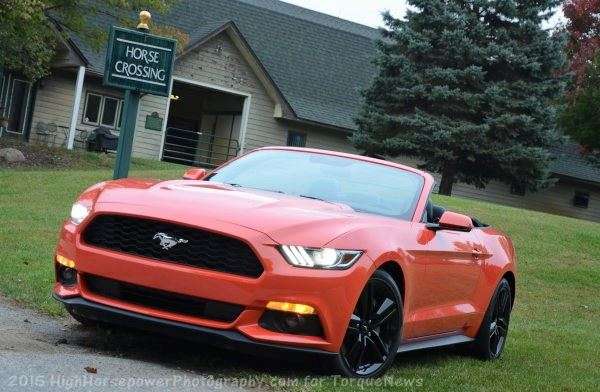 November was the worst sales month of the year for the Ford Mustang, marking the first time since October of 2014 sold less than 8,400 new Mustangs. Fortunately for Ford, the pending sales boom of the 2016 Chevrolet Camaro didn’t hit in November, so the Mustang was able to once again beat the Camaro and the Challenger in monthly sales – marking the 13th straight month atop the charts and building its massive annual lead.

November Sales
In November 2015, Ford Motor Company delivered 7,286 new Mustang fastbacks and convertibles. Before November, the worst sales month this year was February, when “only” 8,454 Mustangs were sold and it comes as no coincidence that both November and February both saw significant amounts of snowfall in some parts of the United States. Really, the fact that 7,286 units sold in a month is the worst month since the 2015 Mustang hit the market last November is a very clear sign of just how popular this new model has been – and this only applies to US sales. The 2015/2016 Ford Mustang has proven to be a hit around the world as well, so come January, I expect to see an announcement from Ford laying out global Mustang sales with the Motor Company claiming the title for the world’s bestselling sporty car.

The 2016 Chevrolet Camaro began reaching new owners last month, but the launch of Camaro Six deliveries came too late in the month to have any real impact. The Camaro was up a bit compared to October, but with 5,303 Camaros delivered last month, the 2015 and 2016 Camaros fell well short of the 2015 and 2016 Mustang. We can expect that to change in December, as more and more 2016 Camaro coupes are being delivered each day, but it stands to be seen whether or not the company will deliver enough new Camaros this month to keep the Mustang from posting a year-long sales title shutout.

The Dodge Challenger also saw a dip in sales from the month before, down to 4,263 units. This marks the worst month of the year for the Challenger as well, but with more than 61,000 new Challenger coupes sold this year, 2015 is already a record year for the brawny Mopar muscle car.

strong>Mustang Leads on the Year by 41k+
The Dodge Challenger is posting a record sales year, but the Ford Mustang will take the title this year for the most sports cars sold in America. After November, Ford has sold 113,607 examples of the Mustang while Chevrolet has sold only 72,136 Camaros. In fact, you could add in all of the Corvettes sold this year, and GM still can’t catch the Mustang in 2015 sales, so the streak of having the bestselling sports car in America for GM comes to an end this year.

2015 is the best year for the Ford Mustang since 2007, when over 134,000 new Mustangs were sold. There is no way for Ford to sell enough Mustangs this month to catch the 2007 figure, but the success of the 2015 Mustang throughout the last 13 months shows that Ford has hit a homerun with the newest generation pony car.