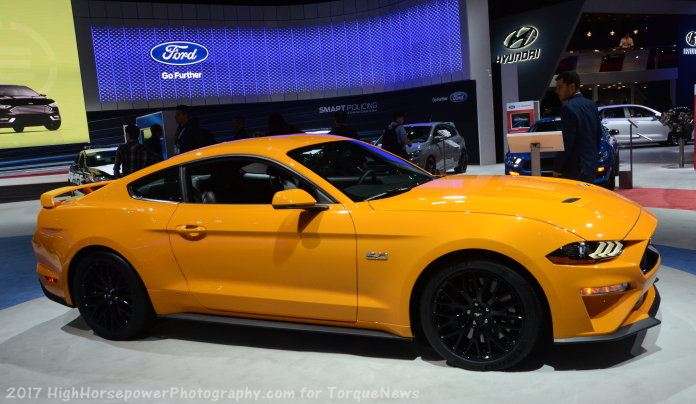 The Ford Mustang Needs to Come to NASCAR's Big League

Ford has used a Mustang in the NASCAR Xfinity Series for years, but with the Chevrolet Camaro ZL1 coming to the NASCAR Monster Energy Series, Ford’s racing division needs to get a Mustang race car ready to battle the Camaro in NASCAR’s big leagues.
Advertisement

If you are not familiar with the current layout of the NASCAR racing world, the Xfinity Series used to be Busch Grand National and they race on Saturdays while the Monster Energy Series is what we used to know as the NASCAR Winston Cup – which takes place on Sundays during the season. For the 2017 NASCAR season, the Xfinity vehicle lineup included the Ford Mustang, the Chevrolet Camaro and the Toyota Camry while the Monster Energy lineup included the Chevrolet SS, the Ford Fusion and the Toyota Camry.

During the 2016 Sprint Cup Series (which became the Monster Energy Series for 2017), there were 36 official races and 5 special races which didn’t count towards the season championship, including the Daytona Can-Am Duals (used to be the Twin 125 qualifiers) and the NASCAR all-star races. During those 41 total racing events, a Ford won just 9 times. A Toyota won 18 times and a Chevrolet won 14 times, but at the end of the season, Jimmie Johnson and his Chevy claimed yet another NASCAR championship. Of those 9 wins for Ford, either Brad Keselowski or Joey Logano had 8 of them and rookie Chris Buescher had the other, leaving the rest of the Ford teams winless in 2016.

During the first portion of the 2017 Monster Energy Series, Ford teams have done significantly better, winning 9 races during the first 25 events. However, Chevrolet has won 10 and Toyota has won 11, so the Fusion is still trailing the Chevy SS and the Toyota Camry.

Ford can and should improve their standing in the Monster Energy Series by introducing a new race car based on the Mustang for the 2018 season. While this car will be mechanically similar to the current Ford Fusion race car, a new body could help improve aerodynamics while also firing another shot in the ongoing war between the Ford Mustang and the Chevrolet Camaro.

This NASCAR muscle car battle has been going on in the NASCAR minor leagues for a few years now, and with the new Camaro ZL1 finally coming to the NASCAR big leagues – Ford needs to get a Mustang race car for their top NASCAR drivers as well. With the refreshed 2018 Mustang hitting the market later this year, introducing a Monster Energy Series Mustang will serve as a great marketing move for the Motor Company and for NASCAR.