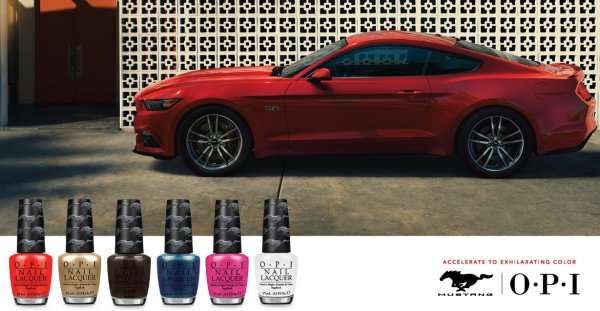 Ford Motor Company announced earlier this year that they were teaming up with the nail polish company Opi to celebrate the 50th birthday of the Ford Mustang and with the celebration well under way – we have a first look at the six shades offered in the Ford Mustang by Opi lineup.
Advertisement

Ford Motor Company wanted to celebrate the 50th anniversary of the Ford Mustang debut in as many ways as possible, including a long list of specially branded items from other companies. Things like shirts and watches came as no surprise, but Ford teamed up with well known nail polish manufacturer Opi to offer something special for the many female Mustang lovers.

“For five decades, Mustang has represented some of the best of American culture, inspiring a feeling of freedom and independence,” says Melanie Banker, Mustang marketing manager. “We are excited to celebrate the iconic Ford Mustang with OPI and tell its story through color.”

My wife has explained to me that Opi is known for using “fun” names for their nail polish colors such as “Blue My Mind”, “I Eat Mainely Lobster” (That’s a light red) and “Get in the Expresso Lane” (dark brown) so the Ford Mustang 50th anniversary collection doesn’t have names like Competition Orange or Grabber Blue…but you do have Race Red and 5 other uniquely named shades.

“Nail color, just like the car she drives, is the ultimate expression of a woman’s personality,” says OPI Co-Founder and Executive Vice President Suzi Weiss-Fischmann. “Automobiles are synonymous with style, and there is a special kind of love affair between a woman and her car. These lacquers celebrate a woman’s pursuit of excitement and invite OPI fans to accentuate their personal style and embrace Mustang’s adventurous spirit through color.”

First up, the Opi Ford Mustang collection of nail polish begins with the familiar hue of Race Red. This is the only option in the Mustang polish lineup with a direct automotive paint color name and considering that the 2015 Ford Mustang was introduced in Race Red in several cities around the world – it is a fitting inclusion in the lineup. After Race Red, all of the colors follow the playful naming policies of the Opi brand.

“Color is very personal to people and to how they express themselves,” said Susan Lampinen, Group Chief Designer, Color and Material, Ford Motor Company. “Similarly, color plays a key role in defining the character of a vehicle: Mustang paint colors need to denote performance, sportiness, and power. They are expressive, bold and eye-catching colors, like the ones chosen for this limited edition collection.”

The Ford Mustang by Opi collection will begin arriving in salons around the country in July including Beauty Brands, Beauty First, Chatters, Dillard’s, jcp Salons, Pure Beauty, Regis, Trade Secret, ULTA and ulta.com. I am not familiar with any of those places, but I know that my wife’s smaller, privately owned salon carries Opi products so even if you don’t frequent one of the brands on that list (which was provided by Ford Motor Company), there is a chance that the Mustang nail polish collection could arrive in your local salon as well. The MSRP of each bottle is $9.50.

Considering how many Ford Mustangs sold in the last 50 years were blue, black, red or white, a great many female Mustang owners should be able to closely coordinate their nail polish color with the shade of their beloved pony car. As for the pink and gold, those colors seem more likely to match some other item – since there have been very few gold Mustangs and no factory hot pink Mustangs – but they are popular hues in the nail polish world so they will help this Mustang collection to appeal to more women who want to show off their dedication to the 50 year old pony car.