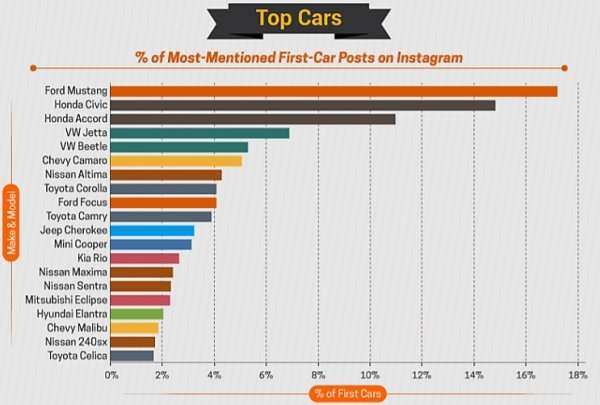 Ford Mustang is the Most Talked About 1st Car Online

A recent study found that on the popular social media app Instagram, the Ford Mustang was the most commonly posted vehicle in discussions about users’ first car – with a handful of foreign compact cars and the Chevrolet Camaro falling in line behind the mighty Mustang.
Advertisement

The folks at AutoNation conducted this study, digging through more than 173,000 posts on Instagram which used the #MyFirstCar hashtag and among those posts, the Ford Mustang was the most commonly pictured vehicle. Roughly 17% of the people posting about their first car proudly displayed their Mustang on the image-intensive social media network, but in the top ten vehicles – only two others were from American automakers.

The Honda Civic was the second most popular car with roughly 15% of Instagram users while being the most popular in 12 states. The Honda Accord was third with 11%, the VW Jetta was fourth with 7% and the VW Beetle rounded out the top 5 with just over 5%.

The Chevrolet Camaro was the sixth most popular first car, with right around 5%, with the Nissan Altima in seventh, the Toyota Corolla in eighth, the Ford Focus in ninth and the Toyota Camry in tenth – all right around the 4% mark. Other than the Mustang and the Civic, none of the cars on the list claimed more than a couple states.

Ford Isn't the Most Popular Brand
While the Ford Mustang is the clear leader in first car images on Instagram, the popularity of the Honda Civic and Honda Accord allowed Honda to be the most commonly discussed brand with the #MyFirstCar hashtag. Ford was the second most common, followed by Chevrolet, Volkswagen and Nissan. Based on the AutoNation map, Honda was the most popular brand among Instagram users in 13-14 states while it appears that Ford lead the way in 19-20 states.

Most Popular Colors and Color By Car
Next, AutoNation calculated the percentages of color popularity in the first car posts and surprisingly, blue won that competition by a very narrow margin. 18.94% of Instagram first car posters had a blue car while 18.53 had red cars and 18.50 had black cars.

Finally, the most popular cars of a certain color were ranked 1-5 and – not surprisingly – the red Ford Mustang was the top dog in that category. The white Honda Accord was second, the black Honda Civic was third, the blue Ford Fiesta was fourth and the blue Ford Focus rounded out the list.