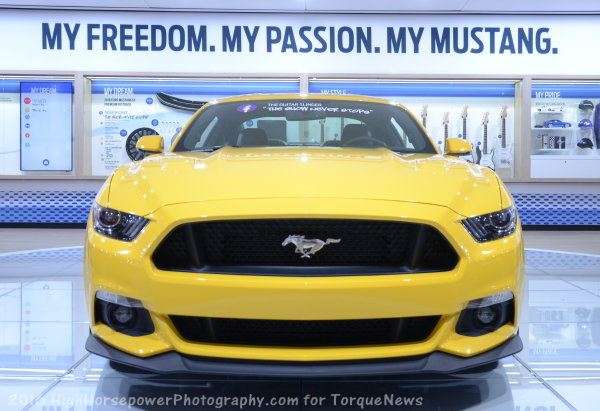 After trailing the Chevrolet Camaro in September and October sales, a combination of a sales surge for the Ford Mustang with the worst sales month of the year for the Camaro has allowed the Mustang to climb back to the top of the muscle car chart – even as sales slump across the segment compared to last year.
Advertisement

The Ford Mustang led the muscle car segment in sales for 22 straight months after it went on sale back in November 2014, but with a dip in Mustang sales combined with a jump in Camaro sales, the Chevrolet muscle car was able to get lead the segment sales race in September and October. Unfortunately for GM fans, that two-month streak has been broken, as November 2016 brought the slowest sales of 2017 for the Camaro while the Ford Mustang rebounded from a very poor October to reclaim the title of the bestselling muscle car.

November 2016 Muscle Car Sales
In November 2016, the Ford Mustang, Chevrolet Camaro and Dodge Challenger combined to move 14,997 units, down from 16,852 in November 2015. That year over year decline is present across all three cars and even though the Mustang saw the biggest decline of the group, Ford still sold enough Mustangs last month to lead the segment.

Ford sold 6,196 Mustangs in November, down from 7,286 in the same month last year. That isn’t a great number, but was better than the previous month – although still one of the worst months since the current generation Mustang first went on sale.

The Chevrolet Camaro was second in November 2016 sales with 4,893 units, down from 5,303 units in the same month last year. Although Camaro sales have been unexpectedly low this year, November was the worst sales month for the Chevy muscle car of the calendar year and the worst sales month since the 6th generation Camaro went on sale across the country.

So, while the Mustang fell by almost 1,100 units while the Camaro and Challenger “only” dropped by around 400 units 350 units (respectively) – the Mustang still won the race for November 2016. That marks the 9th time in the 11 months of 2016 where the Mustang led the segment in sales and since the “new” generation was introduced for the 2015 model year in November 2014 – the Mustang has led 23 of 25 months.

Ford Leads by 30K+ on the Year
While the Chevrolet Camaro was able to win a pair of monthly sales titles this year after being shut out during the 2015 calendar year, the annual muscle car sales race is well out of reach for GM. Through November, Ford has sold 98,868 Mustangs while Chevrolet has sold 65,705 examples of the Camaro and Dodge has sold 59,221 Challengers, giving the Mustang a lead of more than 30,000 units over the next closest car in the class.

April wrote on December 2, 2016 - 10:42pm Permalink
Gm stopped the massive discounts and put camaro out of people who can afford them. While Ford added more incentives and more fleet sales. The better car is by everyone who is credible a better car. But price is king.
Steve wrote on December 5, 2016 - 9:07am Permalink
Just not true April, the Mustang is a far superior day-to-day car than the Camaro, which GM had regulated to "ideal 3rd car" status by miniaturizing it. Ford could build a Mustang that is too small for daily use as a 2+2, using the presence of the back seat to falsely qualify for insurance reductions over a true two seater however they don't, honesty might be more ingrained in Ford's culture I suppose. Clearly with the price reductions drew some Chevy fans that either felt sorry for the lagging Camaro or decided a couple thousand off somehow made the Camaro a worthwhile gamble, I believe the former to be true myself. For what it's worth I gave the Camaro a second shot though came away with the same impression, way too small, way too expensive and the Mustang looks much better. As I have said before, Ford can and will be able to update the Mustang's design to get the performance of a Mustang GT on par with the Camaro. For instance MagnaRide shocks are coming, it sounds like the GT350 front end is coming and significantly more power in the higher rev ranges. On the other hand it'll take a clean sheet redesign to get a Camaro to actually seat four and have a usable trunk. It's now possible to get a Mustang GT with 475 HP which though we haven't seen a test just yet I have to imagine with MagnaRide shocks close the gap if not out runs the Camaro - and you don't feel like you are in a coffin. The Camaro is not the better car, you may prefer it however clearly given your obvious brand loyalty and consistency of posts you're likely a paid blogger, apparently GM is spending money for social engineering, which still is not going to make a brutal track car a good day-to-day car. With all your excuses while Ford has been able to document an inflow of buyers that just can't put up with the poor reliability of European alternatives and have found the Grand Touring nature of the Mustang to their liking. Eventually April you'll be a Mustang fan, I give you a couple more years and you'll get tired of being on the ugly duckling's side when realize that was just a fairy tale, a duck will never become swan.
Harry wrote on December 6, 2016 - 9:03am Permalink
GM can make the Camaro the best performer but the one thing they have never come to grips with is the horrible styling. Between the "grinning" front grill, ugly and disfunctional dashboard and zero back seat room I chose the Mustang hands down.
Jason wrote on December 6, 2016 - 12:40pm Permalink
I now get it. Leased a 2014 Camaro...loved it! Went shopping for a 2017 and just couldn't put a deal together, even on the leftover 2016's dealers were giving away with up to 25% off msrp. My credit union Will Not lease Camaros due to the horrible re-sale...but interestingly enough, will lease a Mustang (better resale they say). So I went Mustang shopping and leased a 2016 GT with a $5k rebate from Ford due to the 2017's being out. The Mustang is BY FAR the superior daily driver. I'm a Camaro fan (any musclecar actually), but no comparison in the ride, visibility and even the fit and finish of the Mustang. Some magazine stated the Camaro is the better Super-Sport car (SS), but the Mustang is the better Grand Touring car (GT). I guess the cars live up to their badges. I will be giving up a few tenths in the 1/4 mile to my neighbor's new 2017 Camaro, but the aftermarket is much stronger for Mustang bolt-ons and I'll just focus on being the better driver at the light. Hope all 3 brands sell well, each of them need each other to succeed.