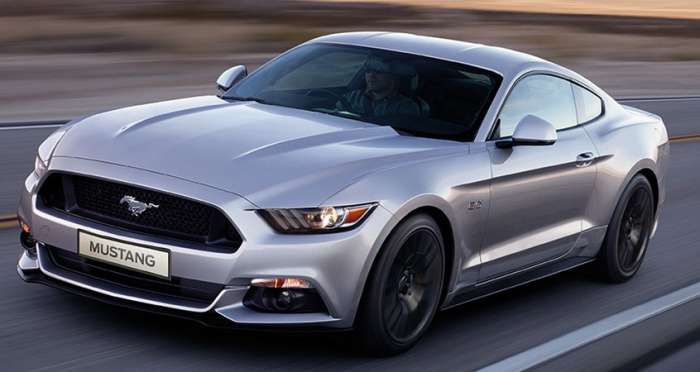 The new Ford Mustang continues its domination of the global sports car scene with India being the newest market topped by the legendary pony car in right hand drive form – although leading the Indian sports car market didn’t take nearly as many sales as it does in Australia, Germany or the USA.
Advertisement

When Ford Motor Company introduced the 2015 Mustang, they announced that this would be the first Mustang built in both left hand drive and right hand drive configurations. The goal of building right-drive Mustangs was to help Ford become the leader in the global sports car race and that decision has paid off big time, with the Ford Mustang become the bestselling sports car or one of the bestselling sports cars in a variety of key markets including Australia, Germany and the UK.

Well, the right hand drive Ford Mustang has claimed the title of the bestselling sports car in a new market, with Indian buyers lining up to snatch up every RHD Mustang GT sent to their country.

The Ford Mustang Leads in India
The Ford Mustang is only available in GT form in India, so the 5.0L V8 is standard on every new Mustang sold in that region. Because the Mustang is only available with the 5.0L V8, the 6-speed automatic transmission and a loaded interior, it is quite expensive in India – carrying a starting price of 6.5 million Indian Rupees. That is just shy of $97,000 US dollars based on the current exchange rate, so owning a Ford Mustang GT in India is a very expensive endeavor and that is before you factor in the cost of feeding that hungry V8.

In short, the Ford Mustang GT is priced like a premium luxury car in India, but after the first month-long period of sales, the Mustang has become the market’s bestselling sports car.

That is another notch on Ford’s belt and it lengthens the already impressive list of markets where the Mustang is the most popular sports car, but unlike markets like Germany, Australia and the UK, the Motor Company didn’t need to sell thousands of cars to lead the segment.

In fact, leading the Indian market didn’t even require Ford to sell 100 Mustangs. For the Mustang to lead the Indian sports car market, Ford had to sell only 35 units in the first month of deliveries and with 100 Mustang GT coupes planned for the Indian market this year – all of which are allegedly spoken for – there seems to be a good chance that the Ford Mustang GT could lead India’s sports car market for the year.

While sales in India really don’t play a big role in terms of Ford selling the most sports cars in the world, the Mustang GT proving to be so popular in India allows the Motor Company to add another country to the list of those which prefer the Mustang over all other sporty cars.