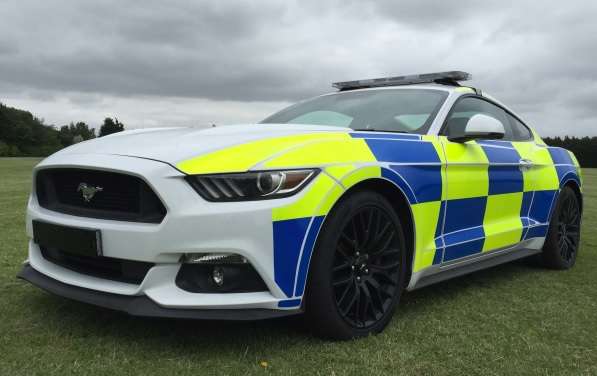 The new Ford Mustang was recently displayed at a trade show in the United Kingdom and depending on the approval process required of all new special service vehicles – the American muscle car could become the next British police car.
Advertisement

The Ford Mustang has taken Europe by storm, with buyers lining up in countries all over the continent for the first globally-marketed version of the historic American muscle car. In fact, the Mustang is so popular that British police might be interested in using the high performance beast for their new patrol vehicles.

A Mustang Police Car in the UK?
While the Ford Mustang might seem like an odd police car to someone whose town relies only on large sedans and SUVs, but the Mustang has been in use for decades as a police vehicle in a variety of markets around the US. In addition to being a popular parade vehicle or crowd control vehicle for police forces in the US, the high performance pony car is an excellent pursuit vehicles. Most importantly, for a vehicle that costs around $35,000, it is hard to match the performance capabilities.

For this reason, the Australian police considered the Ford Mustang for their police force as a replacement for the departing Falcon sedan, but when the car ran into mechanical issues during the police trials – the Aussies removed it from the running. Fortunately, the Mustang performed well in many of the tests, so provided that no odd mechanical issues crop up in the UK tests – the Brits could have American muscle cars patrolling their streets.

At a recent trade show in the UK, Ford displayed the two new Mustangs – one in an incognito, undercover look and another with a light bar on the roof and an unmistakable yellow, blue and orange police livery (shown above). There is no question that the chin spoiler makes for one wicked looking pursuit vehicle, striking heart into the fear of speeders and for those who try to run…the 410 horsepower V8 will make short work of most common cars strolling the British countryside.

It is unclear as to when the police departments around the UK will decide whether or not to begin using the Ford Mustang, but the first step is Ford offering the Mustang police package overseas. Right now, there has been no word on that and with the car being in such high demand, it seems unlikely that the police would be driving the V8 muscle cars right away, but should more news surface you will find it here on TorqueNews.com.