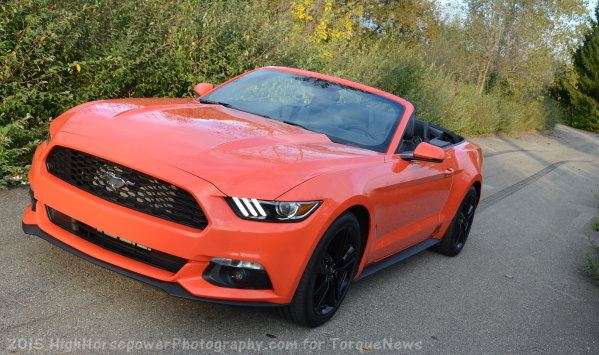 The Ford Mustang posted another stellar sales month in October 2015, moving more than 10,000 units for the 5th time this year and in doing so, the Mustang is nearly 40,000 units ahead of the Chevrolet Camaro in the annual sales race – making up for 5 straight years of losing the fight by slaughtering the competition in 2015.
Advertisement

Since the 2015 Ford Mustang was introduced late in the 2014 calendar year, the mighty Mustang has been the top dog in the muscle car sales race each and every month. With the big win in October 2015, Ford has led the segment every month this year and during the final two months last year, giving the Mustang 12 straight months of segment sales victories. In fact, the Mustang has led the segment each month by a comfortable margin, with the Chevrolet Camaro trailing by no less than 1,000 units in each of the past 12 months. As a result, the Mustang has amassed a gigantic lead over the competition which has climbed to an advantage of almost 40,000 units more than the Camaro.

Most importantly, with two months left in the 2015 calendar year, the Ford Mustang has already topped 100,000 units sold – marking the first time that any muscle car has reached that plateau since the Mustang did it back in 2007.

October 2015 Muscle Car Sales
As has been the case every month this year, the Ford Mustang was the bestselling model in the muscle car segment and for the 5th time this year, Ford topped 10,000 Mustangs sold. With 10,096 2015 and 2016 Mustangs sold last month, October was the 5th best sales month for the newest generation Mustang and outside of the stronger months this year, you have to go back to spring of 2012 to find a month when Ford sold more Mustangs than they did last month.

In short, October was another very good month for the Ford Mustang.

On the other hand, things weren’t so great for the Chevrolet Camaro, but that was to be expected with many consumers holding off for the 2016 Camaro. GM still managed to sell 5,289 Camaros last month, but as the 3rd worst month of the year, October was another month where the Mustang built on its annual sales lead.

So, while Chevrolet was able to win five years straight, the Ford Mustang has come charging back in a big way – handing out a beating like we haven’t seen in more than a decade.

100,000+ Mustangs Sold
Thanks to the strong October, the Ford Mustang has reached 106,321 units sold through the first 10 months of 2015. The last time Ford sold more than 100,000 Mustangs in a single calendar year came back in 2007, which was the final year that the Mustang was the only muscle car sold in America. The Dodge Challenger returned for 2008 and the Chevrolet Camaro returned for 2010, and since those two have rejoined their brand lineups, the best sales month for the Mustang came in 2012, when Ford sold 82,995 Mustangs.

This means that if Ford doesn’t sell a single Mustang during November or December (which isn’t realistic), the 2015 calendar year will best the 2012 total by an incredible 23,000+ units. Also, if the Mustang sells through November and December at the worst pace of the 2015 year (8,454 in February), Ford will add another 17,000 or so units to the total – leading to right around 123,000 Mustangs sold during the 2015 calendar year.