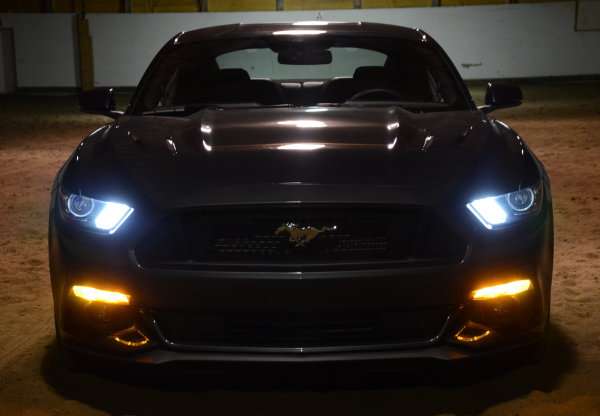 It seems as though the Ford Mustang will become the weapon of choice for Blue Oval drivers in the Australian V8 Supercar racing series – meaning that there will either be a coupe running in what has traditionally always been a sedan-only series, or the Mustang body will be adapted to fit on the current sedan race car platform.
Advertisement

The Virgin Australia Supercar Championship – or simply the “V8 Supercars” as the series has long been known – has always been populated by high performance, 4-door sedans like the Ford Falcon and the Holden Commodore. More recently, those familiar Aussie saloons have been joined by the Mercedes-Benz E63 AMG W212, Nissan Altima L33 and Volvo S60 as the popular touring car series has grown in popularity around the world.

However, production of the Ford Falcon ended last year and since the cars in the V8 Supercar series are required to be based on a production car, Ford teams are facing a dilemma for the 2018 season. According to Supercars driver Mark Winterbottom of Prodrive Racing Australia, the solution is a new race car based on the Ford Mustang.

Prodrive has since stated that no such decision has been made, but Winterbottom’s input would make sense.

The only “problem” with that idea is that the Ford Mustang is a 2-door coupe and the V8 Supercar series has always been a 4-door sedan-only affair. This means that the series will either have to change their rules for the Mustang – which opens up a whole new list of possible vehicles from automakers around the world – or the Supercar teams are going to need to create a Ford Mustang sedan race car.

Both seem unlikely, but something is going to have to change in order for the Ford teams to have a car for the 2018 season.

Building a Mustang V8 Supercar
If you are unfamiliar with the V8 Supercar series, here is a quick rundown of how the series works or, more specifically, how their cars work.

Since the beginning of the series, it has been 4-door touring saloons and it has been traditionally dominated by the Ford Falcon and the Holden Commodore, with all of the cars being closely based on the production versions. More recently, the series has moved to a more NASCAR-like setup where all of the cars run the same basic chassis, the same basic suspension setup and some similar aerodynamic features – although each brand has its own unique body and some variety of a 5.0L V8 engine.

With this modern chassis system, the cars are less expensive since teams aren’t responsible for the same level of development. They buy the chassis, add their own body and engine and go racing.

Because all of the cars are basically the same vehicle with a unique engine and body, it really won’t make any difference if they call the newest Ford Supercar a Mustang, since it will have the same underpinnings and drivetrain as the Falcon race cars. However, every other car in the history of the sport has been a 4-door sedan, so there comes the matter of adjusting the rules for a 2-door V8 Supercar. If the series allows teams to run the Ford Mustang, then they have to also permit the Holden teams to run the Camaro, the Nissan teams to run the GTR and the Mercedes teams to run any of their sportier 2-door models. Changing the rules for the Mustang could completely change the face of the legendary sedan-racing series and while the cars are barely related to the production sedans at this point – you have to wonder how fans will feel about the shift to coupes just to help out the Ford teams.

Of course, the other option is for the Ford teams to adapt the look of the Mustang to the body of the Falcon 4-door race car. At that point, the car really wouldn’t be based on a production car, since there is no such thing as a Mustang sedan – which brings us back to the idea of the V8 Supercar series changing their rules to keep the Ford teams involved.