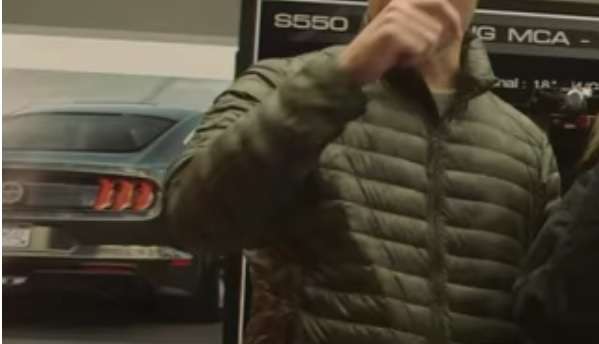 Ford Might be Working on a New 2018 Bullitt Mustang

A video posted on the official YouTube account of Dwayne “The Rock” Johnson shows what certainly looks like the 2018 Ford Mustang in Bullitt trim – possibly setting up a special 50th anniversary package of the first Bullitt Mustang.
Advertisement

So, before getting into this all, I should point out that Ford Motor Company hasn’t said a word about the existence of a new Bullitt Mustang. However in this behind the scenes video from Dwayne “The Rock” Johnson, there is no question that sketches of a Bullitt Mustang are shown in the background.

The Rock and Ford
Wrestling superstar and actor Dwayne “The Rock” Johnson has recently become a Ford spokesperson and as you might expect, this partnership has led to a series of new commercials. The Rock headed to “the Ford factory in Detroit” to make some of these commercials and promotional videos, and from that visit, The Rock made a short behind the scenes video to post to his YouTube account.

While watching this video, one of the members at Mustang6g.com noticed some artwork in the background which they believe shows the 2018 Ford Mustang in Bullitt trim – and I agree. In the video, the first look at this dark green Mustang arrives around the 3:09 mark and over the next few seconds, we can see what appears to be a Bullitt Mustang from just about every angle.

We can see what appears to be a 2018 Mustang GT in Dark Highland Green with black wheels, but most importantly, it appears to have the Bullitt rear gas cap (as shown in the image above).

The Bullitt Mustang
If you are somehow unfamiliar with the 1968 movie Bullitt, starring Steve McQueen as detective Frank Bullitt. Bullitt’s police vehicle of choice was a 1968 Ford Mustang GT in Dark Highland Green and with some of the most epic chase scenes in Hollywood history – the Bullitt Mustang has become one of the most iconic American movie cars.

Ford revived the Bullitt name with a limited edition trimline of the Mustang GT in 2001, and in addition to the Dark Highland Green exterior paint and the unique wheels, the 2001 Bullitt Mustang had a little more power via a new throttle body, a new intake and catback exhaust system. The Bullitt Mustang also had a revised suspension setup for improved handling, so while this package wasn’t significantly more elaborate than the standard Mustang GT – it was a bit better in every way.

The next Bullitt Mustang came in 2008, when Ford celebrated the 40th anniversary of the movie with another lightly modified package based on the Mustang GT. Once again, some simple engine mods added a few extra ponies as well as a sportier suspension setup and better brakes. Of course, the 2008 (and 2009) Mustang Bullitt was offered in Dark Highland Green with black wheels and out back, the “faux gas cap” wore the Bullitt logo.

The mystery Mustang shown in the background of The Rock’s video appears to be Dark Highland Green and it appears to have black wheels, just like the 2008-2009 models. Most significantly, as shown in the screen shot above, this Mustang almost certainly wears the Bullitt rear gas cap.

Now, this artwork could mean nothing, as there is tons of artwork in areas which are generally off limits to the public or to cameras, but with the movie Bullitt being released in 1968, the 2018 Mustang could effectively celebrate the 50th anniversary of the movie and the first Bullitt Mustang with a special edition package built on the Mustang GT.

Check out the video below for a closer look, with the Bullitt images starting around the 3:09 mark.