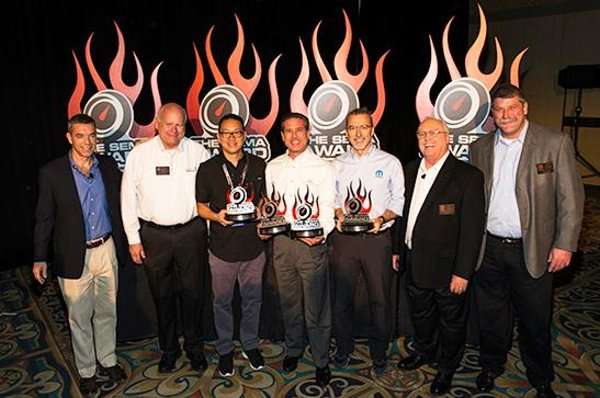 For the fourth consecutive year, the organizers of the massive SEMA Show in Las Vegas have named the “Hottest” vehicles of the event and this year Ford, Scion and Jeep took home those awards with Ford claiming two while Toyota’s Scion brand and the Chrysler Group’s Jeep brand claimed one each.
Advertisement

When the SEMA Hottest Vehicle Awards were first introduced for the 2010 SEMA Show, there were only three awards – Hottest Car, Hottest Truck and Hottest SUV. Beginning with the 2011 SEMA Show, Hottest Sport Compact was added, essentially to give the smaller, less powerful performance models not named Camaro or Mustang a chance of being recognized. When the awards were introduced for the 2010 SEMA Show, the Chevrolet Camaro took Hottest Car, the Ford F Series took Hottest Truck and the Jeep Wrangler took Hottest Sport Utility Vehicle. When the Hottest Sport Compact award was introduced in 2011, the Fiat 500 claimed that new honor while the Ford F Series, Chevrolet Camaro and Jeep Wrangler all repeated in the second year of the award.

With the announcement of the 2012 SEMA Show awards last year, the Ford F Series and Jeep Wrangler continued their dominance of the truck and SUV categories but the Ford Mustang snatched away the Hottest Car award from the Camaro while the Scion FR-S claimed Hottest Sport Compact award.

This means that the entire 2013 SEMA Show Award lineup with the Ford Mustang, Scion FR-S, Ford F Series and Jeep Wrangler are repeat winners from last year while the F Series pickup and the Wrangler are both undefeated in their categories over the history of the SEMA Awards. Considering the size of the aftermarket for the Jeep Wrangler and Ford F Series, it would be hard to imagine either of those models being dethroned any time soon and right now, there is no other sport compact on the market that is as hot as the Scion FR-S. In terms of the Hottest Car, the introduction of the new Ford Mustang in 2014 could allow the original pony car to claim the award again in 2014 but that won’t come without a whole lot of fight from the folks at Chevrolet. In any case, the Ford Mustang, Scion FR-S, Ford F Series and Jeep Wrangler are the kings of their respective hills for 2013. Congratulations to all of the winners!