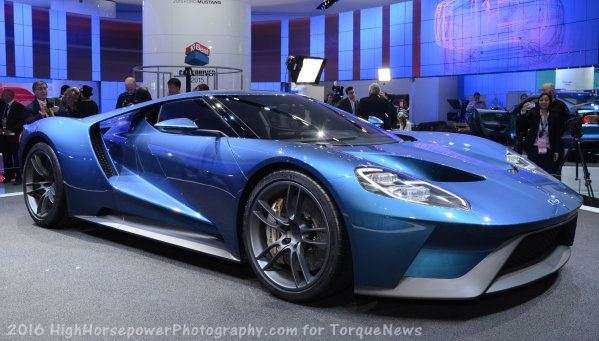 Ford has Received 7,000 Orders for the New GT Supercar

Ford Motor Company opened the intricate application process for the 2017 Ford GT a little over a week ago and in that short time, the automaker has received more than 7,000 applications to buy the new supercar – with just 500 planned for production.
Advertisement

While both General Motors and the Chrysler Group have done a great job of keeping their fans in a new supercar over the past decade, it has been more than a decade since Ford Motor Company introduced their last supercar. The 2005-2006 Ford GT gave diehard fans of the Blue Oval a chance to support their favorite automaker in a clash with the likes of the Chevrolet Corvette and the Dodge Viper, but since 2006 – the Corvette and the Viper have bene the only supercars from the mainstream American automakers.

That will all change for the 2017 model year, as the new Ford GT is slated to hit showrooms within the next year, and the prospect of owning a 600+ horsepower, twin turbocharged Ford supercar has caught the attention of the go-fast community in a big way.

Big Demand for the 2017 Ford GT
The application process for the 2017 Ford GT officially began on April 13th, 2016 and starting on that day, those folks who want to buy the new supercar could apply to do so. Ford is handling the ordering process of their GT in a way that they expect will keep the cars out of the hands of folks looking to flip them for a quick buck and those folks who plan to tuck the car away as a collectable. Ford wants people to drive and race their new supercar, so they are requiring an application process through which they will hand pick every buyer of the 2017 GT.

The company set up a special website where interested buyers could apply and the website FordGT.com received more than 180,000 visitors in the first week that the site was live. More importantly, more than 7,000 people applied to buy the new GT, showing that the company will have no issue selling every supercar they build. The only problem is that the new Ford GT will be limited to just 500 units over two years, meaning that of the 7,000 people who applied in the first 7 days, 6,750 of them (likely more) will get turned down.

Keep in mind that these folks are signing up to buy a car that doesn’t have official power numbers and the expected price is to be north of $400,000 – yet more than 7,000 people are interested to buy one of the 500 units planned for production between now and 2018.

Who Does Ford Pick?
The Motor Company has a tough task ahead of them in weeding out the buyers whom they do not want purchasing the 2017 Ford GT, but they have offered some clues as to what factors will go into getting approved to buy the new supercar.

First off, those people who have previously purchased or who still own a 2005-2006 Ford GT will be given preferential treatment, but the company sold more than 4,000 examples of that supercar, so getting a new model will go much further than that. Next, those applicants who have purchased a great number of Ford products – such as business owners who fill large fleets with Ford Motor Company vehicles – will get the nod ahead of those who do not own or buy many Ford products. Lastly, Ford wants “brand ambassadors” who will actually drive the GT, so previous history with owning and driving a supercar, or experience with high performance cars in general, should have a big role in the applicants Ford approves.

LG's New EV Battery Plant Is a Welcome News for Tesla
Tesla Giga Berlin's New Hurdle: It's Not Only the Gov't, but Now Tesla Itself
END_OF_DOCUMENT_TOKEN_TO_BE_REPLACED