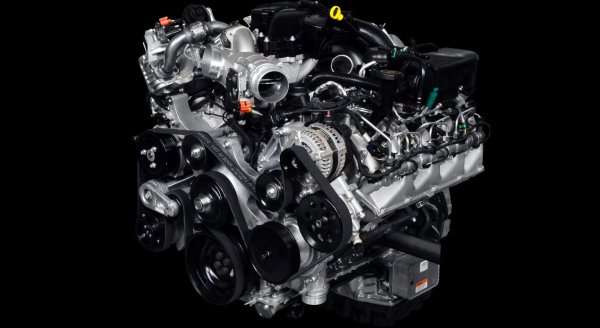 Ford Has Built a Half Million F-Series Trucks with the 6.7L Powerstroke V8

Ford Motor Company has announced that the 500,000th 6.7L Powerstroke V8 turbo diesel has been installed into a Ford F Series Super Duty pickup – a remarkable milestone for Ford as they continue to be the only company selling a heavy duty diesel truck in the US that relies on a drivetrain that is designed and built in-house.
Advertisement

Ford Motor Company introduced their new 6.7L Powerstroke turbocharged diesel V8 engine back in 2010 after having had Navistar International produce the 7.3L, 6.0L and 6.4L Powerstroke diesel engines between 1994 and 2010. Since launching the in-house designed and built Powerstroke for the 2011 model year, it has taken Ford Motor Company just three full model years (2011, 2012, 2013) and a short stint of the 2014 model year to hit the half million mark for Super Duty pickups built with the Powerstroke V8.

“This is a significant milestone for an engine that was introduced just a few years ago,” said Doug Scott, Ford Truck group marketing manager. “Demand for the engine has outpaced our expectations; our customers love the combination of performance, towing capability, and fuel economy.”

The truck that received the 500,000th 6.7L Powerstroke V8 was a 2014 Ford Super Duty F350 Lariat built at the Kentucky Truck Plant in Louisville. With 400 horsepower at 2,800rpm and 800lb-ft of torque at 1,600rpm, this truck will hit the streets as one of the most powerful pickups sold in America.

Ford is the only automaker selling heavy duty consumer trucks in America that derive their diesel power from both an engine and transmission that are designed, engineered and built in-house. The Ram heavy duty lineup relies on the outsourced Cummins Turbo Diesel engine while the Chevrolet and GMC heavy duty pickups rely on an outsourced Allison transmission.

“Our Super Duty customers are no-nonsense, no-compromise individuals,” said Joe Bakaj, vice president of powertrain engineering. “Those are the attributes our team took to heart when engineering this diesel engine so we can deliver Built Ford Tough capability, reliability and enhanced productivity.”

-Compacted Graphite Iron Engine – This is a stronger material than cast iron with the basic block design optimized for reduced weight and maximum durability while facing the rigors of being a heavy duty engine.

-High Mid-Mounted Turbocharger – Unlike other turbocharged diesel engines that have the turbochargers mounted under the truck, the 6.7L Powerstroke diesel has the turbo mounted in the upper middle portion of the engine, which is fed by the unique inboard exhaust setup.

-Aluminum Cylinder Heads – In addition to reducing the overall weight of the engine, these lightweight cylinder heads feature a mid-deck construction with dual water jackets for improved engine cooling while six head bolts rather than four help to provide better cylinder sealing and durability.

-B20 Biodiesel Capability - The 6.7L Powerstroke diesel engine is able to run B20 biodiesel, a mix of 20% biodiesel and 80% traditional petroleum based diesel.