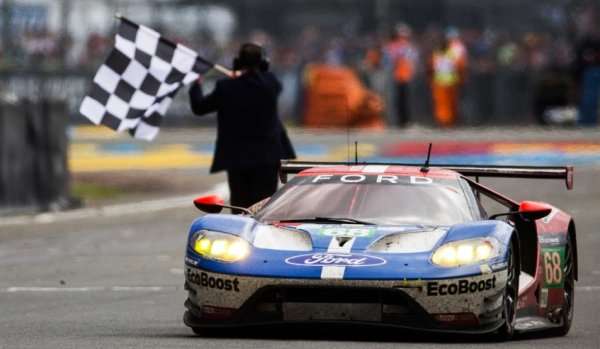 50 years after the 1966 Ford GT40 race cars finished 1-2-3 in the 24 Hours of LeMans, the new Ford GT race car took the class win, along with the 3rd and 4th place spots in the GTE Pro group – while the Balance of Performance adjustments continued to keep the Corvette Racing crew fighting through the middle of the pack.
Advertisement

Back in 1966, the Carroll Shelby’s Ford GT40 race cars came into the 24 Hours of LeMans race and did what no American team had done before – beating Ferrari, winning the race and take the 2nd and 3rd positions along with the top spot. Shelby’s Ford GT40s dominated the LeMans field and with the new Ford GT race cars heading to LeMans with the Ford Chip Ganassi Racing squad, Ford hoped the celebrate the 50th anniversary of that first LeMans domination with a repeat in modern times. Of course, things are a little different now for the Ford teams, as their GTE Pro class is not one of the quicker groups in the LeMans field so there isn’t a realistic hope of getting the overall win, but they still had a chance of dominating their class.

Just like they did 50 years ago, the Ford GT race cars dominated and while they didn’t sweep the podium like they did back in ’66, Ford did grab the 1st, 3rd and 4th spots in GTE Pro.

The Ford GT Shines
The four Ganassi Ford GT teams were impressive in qualifying, turning in the quickest times in both sessions and capturing the 1st, 2nd, 4th and 5th starting positions in the GTE Pro class. The #51 AF Corse Ferrari 488 qualified 3rd and the #71 AF Corse Ferrari qualified 6th while the #82 Risi Competizione Ferrari grabbed the 7th spot.

Early on, the race was primarily a battle between the Ford GT teams and the Ferrari teams while the Chevrolet Corvette C7R teams struggled near the back of the field. Both of the AF Corse Ferraris dropped out of the race between the 13th and 17th hours, seemingly clearing the way for the Ford GT domination. Even though the #67 Ford went off track and went out of contention in the middle stages of the race, Ford still had three horses running strong at the front of the class.

While the #82 Risi Ferrari would spend some time at the front of the GTE Pro field during the final hours, the #68 Ford GT of Chip Ganassi USA had pulled away from the Ferrari by more than a minute by the time the race end. Those two cars were the only two in the GTE Pro class to complete 340 laps – 44 laps behind the overall race-winning Porsche 919.

50 years after the Shelby Ford GT40 teams took the top three spots at LeMans, the new Ford GT teams took the win and three out of the top four spots in their class – which is as close as a GTE class car will come to winning LeMans with the inclusion of the crazy fast Prototype cars.

The #2 Porsche 919 Hybrid won the race overall, beating the #6 Toyota TS050 when the Toyota died on the second-to-last lap of the race.

Miserable LeMans for Corvette Racing
In the production based racing classes, there are few that have dominated at LeMans like the crew from Corvette Racing, but the 2016 running of the 24 hour race will likely be one that they will want to forget. After Balance of Performance adjustments took the Corvette C7R teams from being two of the three quickest on Test Day to the two slowest in class for qualifying, the race officials gave the Corvettes a little more power for the race – but it made little difference.

After both Corvettes started way back in the field, they spent the early stages of the race working their way up into the middle of the 14-car GTE Pro class. Unfortunately, the #64 Corvette (which won the 2015 GTE Pro class at LeMans) crashed hard in the 16th hour and while the #63 car ran better than it did in qualifying, they were forced to settle for a 7th place finish in the class, 4 laps behind the class winning Ford.

To get an idea of how much faster the Ford GT teams were than the post-Balance of Performance Corvettes, we can look at the best laps times for each of the cars. In qualifying, the #64 car turned in a best lap of 3:55.848 while the #63 car ran a 3:57.967. The top qualifying Ford had a time of 3:51.185, but the officials pulled some boost from the Ford teams before the race.

In the race, the same #68 Ford GT which held the class pole and won the race in GTE Pro ran a best lap of 3:51.840, so it was less than 7 tenths of a second slower. On the other hand, the Corvette teams both improved, but they didn’t improve by anywhere near enough to compete with frontrunners. The #63 Corvette which qualified last and finished 7th improved their best time by better than four seconds while the #64 team’s best time improved by a second and a half, but in the end, they couldn’t lay down consistent enough laps to battle with the Ford and Ferrari teams.

Needless to say, the Corvette Racing fans are frustrated the impact of the Balance of Performance adjustments, but we can expect to see the Corvette C7R pair back to dominating the American LeMans series early next month at Watkin’s Glen.

tony1991 wrote on June 22, 2016 - 9:39pm Permalink
They probably did it to make sure the Ford teams could win. You know to make a better show and make money from it. Because that's what it is, its show to make money, rather than allowing Chevy to show up Ford. To me that would have been a better show if it had Chevy proving to Ford that name doesn't win races. Welp might as well go back to watching basketball beings that this is pretty much the same thing now.