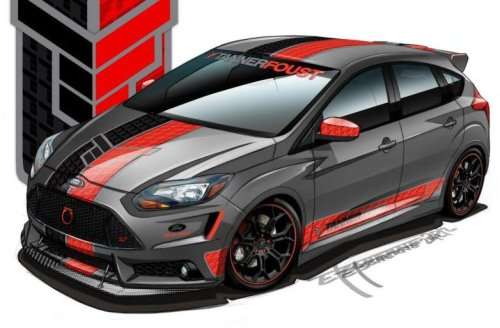 The Ford Focus ST to be well represented at SEMA 2012

Ford Motor Company has just issued a new group of artwork designed to preview the cars that will fill their booth at the 2012 SEMA Show with the latest batch focusing on the new high performance Ford Focus ST – including unique renditions of the sporty 5-door hatch from names like Cosworth, Steeda, Galpin Auto Sports and Tanner Foust.
Advertisement

The Ford Focus ST arrives in the US after similar models have been offered overseas for years with great success so with the current growing interest in sporty 5-door models – Ford will use their new EcoBoost’d Focus ST to show the factory performance potential of Ford products other than the mighty Mustang. Last year, the sprawling indoor Ford SEMA Show display offered a look at how the standard Focus (SE, SEL) could be transformed into more unique, sporty vehicles but ford 2012, the tuners started with the far more powerful Focus ST. All of these cars are powered by the 2.0L EcoBoost 4-cylinder engine and a six speed manual transmission; sending 252 horsepower and 270lb-ft of torque to the front wheels.

Ford released five drawings on Facebook earlier today, each offering a look at one of the Focus ST hatchbacks that will be helping to fill the Motor Company’s SEMA Show display. Much like the Fusion preview, only a handful of information was offered for each of the vehicles but between the bits of information and what we can see in the images – we have a good idea of what to expect when the 2012 SEMA Show opens.

First up, Bojix Design has put together a bright orange Ford Focus ST with carbon fiber accents on the hood and roof along with a body kit that appears to add side sills, and an aggressive lower front fascia. This Focus ST also includes unique headlights, smoked tail lights, a coilover suspension package and black and orange wheels tucked over a big brake package featuring large calipers along with slotted and drilled brake rotors.

Next up is a joint project between Ford Racing and Cosworth LLC with the result being a 2013 Ford Focus ST that churns out 330 horsepower and somewhere in the area of 320lb-ft of torque. This 30+ percent increase in horsepower and nearly 20% increase in torque is brought about by adding engine goodies from Ford Racing while handling items from Ford Racing and a wheel and tire package from Cosworth help to guarantee that the “CS330” handles just as well as it launches.

Third in line is a 2013 Ford Focus ST modified by the folks at Steeda with only subtle changes on the outside while far more has been done to improve the performance capabilities of this aggressive hatchback. Steeda is a handling specialist so it should come as no surprise that aspect of the Focus ST has been impacted so much with this SEMA Show car. Steeda began by adding their G-Trac suspension package, a Brembo big brake package and a 19” tire package wrapped in high performance tires to allow the ST to handle better without compromising ride quality.

The fourth Focus ST to be teased in the gallery on the right has been modified by the folks at Galpin Auto Sports with the modifications beginning on the outside where GAS has added a rally racing style body kit with flared fenders, an aggressive lower fascia and side sills, a big rear wing, a roof scoop, a unique front fascia and a vented hood. Lightweight wheels have been wrapped in performance rubber and tucked over a big brake package while the suspension package gives this Focus ST a more aggressive ride and superior handling. While no power increases are mentioned, the GAS Focus ST includes a methanol injection package so I suspect that there is more than 252hp under the hood.

Last but certainly not least is the 2013 Ford Focus ST modified by the host of Top Gear USA and the driver of the Global RallyCross-leading Ford rally team Tanner Foust (shown above in the large image). Tanner began by adding an elaborate body kit that changes the front fascia and adds deeper side skirts along with adding a rear wing. Adjustable front and rear suspension components work with a big brake package, lightweight rims and high performance tires to ensure that this car handles well enough to comfortably spend time on the road course while also being a useful daily driver. Foust has also added some power with a cold air intake package and a Magnaflow exhaust system – although we will have to wait for SEMA to find out all o f the specifics.

Click any of the thumbnails on the right for a closer look at the 2013 Ford Focus ST hatchback coming to the 2012 SEMA Show.