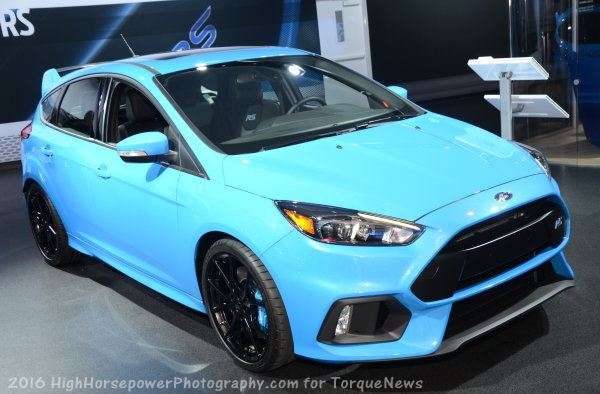 The results for the 2016 Car & Driver Lightning Lap are in and both of the Ford vehicles in the field turned in solid times – with the new Shelby GT350T turning in the 2nd best time ever among American muscle cars and the quickest time ever for the LL2 class while the new Ford Focus RS set the best time ever by a 4-cylinder car in the 10 years of the Lightning Lap shootout.
Advertisement

Each of the last 10 years, Car & Driver has held their annual Lightning Lap shootout on the Grand West configuration at Virginia International Raceway. In this year’s Lightning Lap field, there were two Ford vehicles – the 2017 Focus RS and the 2016 Shelby Mustang GT350R – both of which turned in impressive times.

While finishing 7th doesn’t seem all that great in a 19 car field, it should be pointed out that the 2015 Chevrolet Camaro Z/28 is the only muscle car to turn a quicker time than the new GT350R and with a starting price of $75,000, the old Z/28 was almost $11,000 more than the current Shelby Mustang. That price difference puts the 2016 Shelby Mustang and the 2015 Camaro Z/28 in different classes, and among the LL2 class, the new GT350R is the quickest entry in the 10 years of the event.

For under $65,000, there has been no car in the Car & Driver Lightning Lap shootout to run a quicker lap and the closest competition in the LL2 class was the 2014 Corvette Stingray – which was 2 seconds slower.

Focus RS Sets the Bar for 4-Cylinder Cars
The new Ford Focus RS has been marketed as a street legal track monster since the day that it was first introduced, but some folks were disappointed to see that it was only the 14th quickest car in this year’s Lightning Lap. However, in searching through past years, the new Focus RS is the quickest 4-cylinder production car ever tested on the VIR Grand West course. It is also the quickest 5-door hatchback ever in the Lightning Lap trials.

The Focus RS was also a second and a half quicker than the current Mustang GT with the Performance Pack goodies, so shy of the new Shelby GT350 and GT350R – the Focus RS is the most track capable modern Ford product on the market.

While Ford Motor Company would have likely enjoyed seeing the new Shelby GT350R a bit closer to the Camaro Z/28 time, the fact that the Shelby is the quickest LL2 car and the Focus RS is the quickest 4-cylinder car ever are both very impressive accomplishments for the newest Ford high performance products.