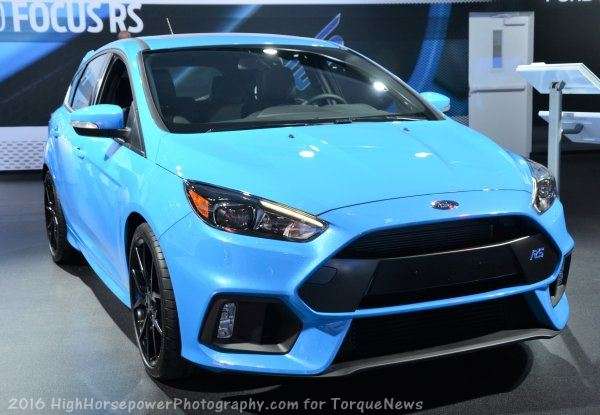 If you have been eagerly awaiting your chance to buy the high performance Ford Focus RS in the United States, your wait is nearing an end, as production of the hottest Ford hatch has begun in the company’s plant in Saarlouis, Germany.
Advertisement

The high performance Ford Focus RS line has long been forbidden fruit for American hot hatch lovers, as this rally-bred compact has only been sold in Europe in the past. That all changes with the 2017 Focus RS, as it will be the first RS-badged product marketed in the United States and with production beginning this week in Germany – the 350hp hatchback appears to be right on track for the expected spring arrival in local dealerships.

The Hottest Hatchback in America
When the 2017 Ford Focus RS hits US dealerships this spring, it will be the most powerful Ford compact ever sold in the US while also being the most powerful vehicle in the performance compact segment. The 2.3L EcoBoost engine in the Focus RS is the same mill from the 2015 Ford Mustang EcoBoost, except the RS development team tweaked the turbocharged mill to offer 350 horsepower in the sporty hatchback.

In addition to the 350 horsepower, the Focus RS will offer 325lb-ft of torque that spikes to 347lb-ft for stints of up to 15 seconds via the overboost feature. When mated with the advanced all-wheel drive system that sends as much as 70% of the power to the rear wheels and at times, as much as 100% of the power to one side of the car, the Focus RS should be a monster in the segment.

Really, the Ford Focus RS could pack enough power to beat a great many of the similarly priced performance cars sold in the US, whether you are on a road course, a drag strip or a big open tarmac intended for drifting.

Speaking of price, the 2017 Ford Focus RS will come with a starting price of $36,605 )including destination), so while it isn’t quite the budget racer of the Focus ST – the RS package definitely offers performance levels to account for that price hike.

Those folks who want to see the 2017 Ford Focus RS before it hits their local dealership this spring can meet it in person at the ongoing 2016 North American International Auto Show in Detroit, where it parked alongside the likes of the new Raptor F150, the Ford GT supercar and the new Shelby GT350 Mustang.