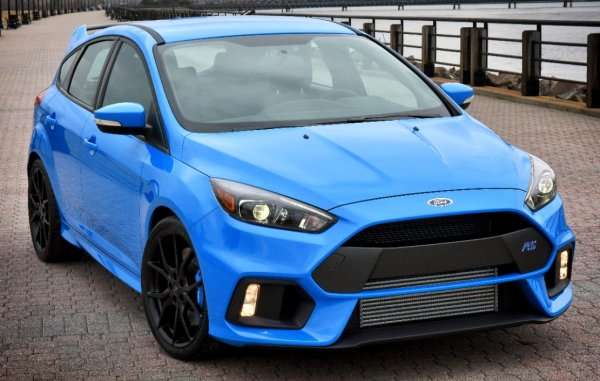 The Ford Focus RS is finally coming to the US after dominating the hot hatch segment in Europe for ages, and today, we have the most important bits of information for a car like this – including the price, the top speed and the 0-60 time of the turbocharged hatchback.
Advertisement

The 2016 Ford Focus RS is powered by a turbocharged 2.3L EcoBoost 4-cylinder, comparable to the one that powers the 2015 Mustang EcoBoost, except the mill in the high performance Focus packs more power than the fuel-friendly turbo Mustang. To be exact, the preliminary power figures for the 2016 Focus RS are 345 horsepower and 347lb-ft of torque, with a manual transmission and an advanced all-wheel drive system putting all of that power to the ground. Those figures make it considerably more powerful than the Subaru WRX STi (305hp290tq) and the Mitsubishi Lancer Evolution (291hp, 300tq), but until now, we didn’t know just how fast or quick the new Focus RS would be. Today we have the news, and that news is exciting.

“The all-new Focus RS will bring the legendary nameplate to a new generation of global customers for the first time,” said Dave Pericak, director, Ford Performance. “Focus RS delivers stunning performance and innovative technology at a price that will make both enthusiast consumers and premium automakers look twice.”

Ford Focus RS Performance Times
While the 2016 Ford Focus RS is far more than just a straight line rocket, this hot hatch is able to dash from 0-40 in just 4.7 seconds. For comparison, the 2015 Mustang GT tested by Motor Trend with the 5.0L V8 and the 6-speed manual transmission got to 60 in 4.4 seconds and that lead to a 12.8 quarter mile. The Focus RS is slightly slower than the Mustang GT, but not by much. The Mitsubishi Lancer Evolution GSR takes 4.9 seconds to get to 60 and the new Subaru WRX STi reportedly runs to 60 in just 4.6-4.8 seconds (numbers vary based on the outlet), so the Focus RS should be able to comfortably beat the Evo in a short sprint or a drag race, while a battle with the new STi might be a touch closer – although still going to the Ford.

In addition to getting up to speed in a hurry, the 2016 Focus RS has an impressive top speed of 165 miles per hour. However, the Subaru STi has a top speed of 174 miles per hour, so on a long high speed run – the Focus might struggle with the Subbie. It should, however, have on issues outrunning the Lancer Evolution, which seems to have a stock top speed under 150mph.

Really, the top speed will matter to very few 2016 Ford Focus RS owners, but that 4.7 second 0-60 time will allow owners to keep up with a great many modern muscle cars in stock form.

Bigger Performance, Bigger Price
The biggest bit of news on the 2016 Ford Focus RS is the price, as the most powerful of the compact hot hatchbacks is also one of the more expensive (not counting European luxury models). The Focus RS starts at $36,605, making it more expensive than the Subaru or the Mitsubishi with which it most closely competes. The STi starts at $34,695 and the Evo starts at $35,305, so the Focus RS costs a couple grand more, but it should be noted that the Focus is a hatchback with far more interior space than the STi or the Evo – in addition to being a whole lot more powerful.

No time frame has been offered by Ford as to when the Focus RS will go on sale, but the first units are expected to hit the street in the spring of 2016.