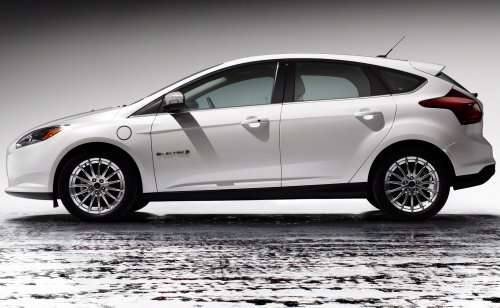 Two weeks ago, we brought you the news that the EPA certified the 2012 Ford Focus Electric as achieving an MPGe rating of a whopping 105 miles per gallon – making the Focus Electric one of most efficient vehicles sold in the US while also earning owners the right to drive alone in the California High Occupancy Vehicle (HOV) lanes and bringing new buyers in Cali an additional $2,500 in tax rebates.
Advertisement

The 2012 Ford Focus Electric offers drivers a combined fuel economy figure of 105 MPGe (electric mile per gallon equivalent) while hitting 99 MPGe on the highway and 110 MPGe around town. The Focus Electric is also able to go 76 miles on a single charge according to the Feds (3 more miles than the Nissan Leaf) while also taking about half the time to fully charge the battery. These figures earned the Focus Electric the right to cruise in the California High Occupancy Vehicle (HOV)/Carpool lanes around the state – a privilege which allows Focus Electric drivers to avoid the “normal lanes” of some of the most congested highways in America.

California is easily the strictest of the states when it comes to clean vehicles and one way that they acknowledge the most fuel efficient vehicles like the 2012 Ford Focus Electric is to allow the drivers to drive in the HOV lanes when driving alone. Traditionally, only drivers with multiple people in the vehicle are permitted to drive in these less traffic-filled lanes but a few years back, the California DMV began permitting those drivers with the ultra-green cars like the Toyota Prius to drive in the HOV lanes around the state.

“Ford is providing customers the power of choice to save money at the pump – from our gas-free Focus Electric to our innovative EcoBoost® technology that delivers leading gas-engine fuel economy,” said John Viera, global director, Sustainability and Vehicle Environmental Matters. “Californians have a legacy of embracing electric vehicles, and programs like the Clean Vehicle Rebate Program provide an excellent incentive for the continued wider adoption of electric vehicles.”

The 2012 Ford Focus Electric also allows drivers to apply for a state-specific $2,500 tax rebate that is added on top of the $7,500 tax rebate issued by the US Federal government. This means that applicable Focus Electric buyers can essentially save $10,000 on the cost of the new Ford 5-door – effectively bringing the price down to just $29,200.

In addition to those vehicles listed above, California also allows the Chevrolet Volt and Toyota Prius Plug-In Hybrid to use the HOV lanes with a special green Clean Air Vehicle sticker but those green decals are restricted to the first 40,000 applicants while the white stickers are unlimited as California makes an effort to entice more drivers to pony up for the most efficient and least polluting cars on the road.

LG's New EV Battery Plant Is a Welcome News for Tesla
Tesla Giga Berlin's New Hurdle: It's Not Only the Gov't, but Now Tesla Itself
END_OF_DOCUMENT_TOKEN_TO_BE_REPLACED