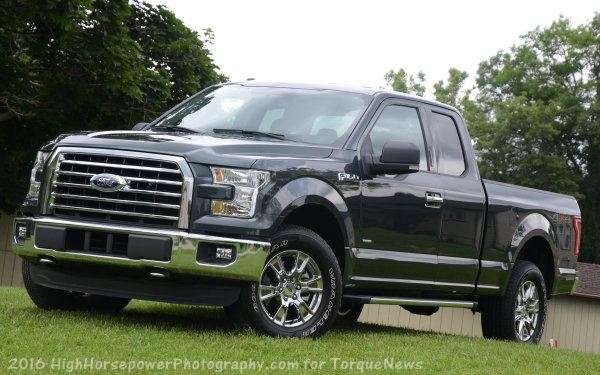 Spy photos indicating that the future Ford F150 will have a 3.0 liter engine have some people believing that the most popular vehicle in America will soon have a diesel mill measuring 3.0 liters, but as a few people have suggested in the comments of our other articles – is there a chance that the F150 will get the 3.0L EcoBoost from the Lincoln lineup?
Advertisement

Over the past year, we have discussed the possibility of a diesel F150 on many occasions and during that time, a handful of pictures and videos have popped up showing what many believe to a diesel F150. We have seen pictures with the Venturi exhaust tips which are very common on diesel trucks and we have even seen (and heard) a video showing what is almost surely a diesel F150 test truck. However, with the expectation that there is a diesel F150 on the way, the next bit of speculation has focused on what size diesel engine the future F150 could have.

Well, according to the folks from Autoblog, it looks like the diesel F150 engine could measure 3.0 liters, lending credit to the rumors that the F150 diesel will be similar to the engine currently in use in the Land Rover lineup. Considering Ford’s previous involvement with Land Rover, this seems like a reasonable possibility, but after several folks wrote in asking about the likelihood of the new Lincoln 3.0L EcoBoost in the F150 – we wanted to look at that option as well.

A 3.0L Diesel F150
The truck that the Autoblog photographers captured appears to be a diesel model with the Venturi exhaust tips, but more importantly, this truck had an emissions certification sticker that suggests that it was fitted with a 3.0L engine. This sticker and the exhaust tips don’t guarantee that the F150 will be getting a 3.0L diesel engine, but this new information supports that early rumors that the F150 oil-burner would indeed be powered by a 3.0L mill.

The current Ranger Rover comes with a 3.0L turbo diesel V6 engine which was developed in cooperation with Ford, Peugeot, Jaguar and Land Rover. In the Range Rover, this engine produces 258 horsepower and 443lb-ft of torque, and if this engine was introduced to the American F150 lineup in this state, it would be the most powerful engine in the F150 lineup in terms of torque output. More importantly, figures of 285hp and 443tq would make the diesel F150 more powerful than the Ram EcoDiesel, which packs 240hp and 420lb-ft of torque.

Also, when you add in the lightweight body of the new F150 and the upcoming 10-speed automatic transmission, there is a good chance that the 3.0L diesel in the F150 would offer better fuel economy numbers than the Ram – making the F150 the most fuel efficient truck in the half ton segment. Right now, the 2.7L EcoBoost makes the F150 the most fuel efficient gasoline-powered truck while the Ram EcoDiesel holds the title for the best overall MPGs from a half ton pickup. The diesel F150 would, in theory, stand to take that title from Ram.

Lincoln EcoBoost in an F150?
Since Ford Motor Company announced that the new Lincoln Continental would feature a 3.0L EcoBoost V6 with 400 horsepower and 400lb-ft of torque, we have been getting questions from readers about the use of this engine in the Ford brand lineup. While the early FoMoCo releases stated that this engine would be exclusive to the Lincoln lineup, I have a hard time believing that the automaker won’t make good use of that engine in something that will sell better than the new large Lincoln.

The new Lincoln 3.0L EcoBoost produces 400 horsepower and 400lb-ft of torque, while likely offering very strong fuel economy numbers. When all other aspects are equal, this 3.0L EcoBoost engine would have a hard time fitting into the F150 lineup, as it offers more horsepower than the premium 3.5L EcoBoost, but far less torque, so it wouldn’t serve as a good replacement for the 3.5L option. As for the 2.7L EcoBoost, this 3.0L option has more horsepower and more torque, but with the 2.7L mill being marketed as the segment’s most efficient gasoline engine, power takes a back seat to fuel economy. Adding the Lincoln 3.0L EcoBoost to the current F150 lineup would create too much overlap with the other EcoBoost options while likely falling short of the 2.7L in fuel economy.

Of course, FoMoCo could cook up a 3.0L EcoBoost for the F150 which could provide the power to adequately replace the current 3.5L EcoBoost, but as it stands today – I don’t expect to see the Lincoln EcoBoost in the F150 in the near future.

On the other hand, I do expect to see a diesel F150 and if I was a betting man (and I am not), I would guess that the super-efficient F150 engine will measure 3.0 liters.