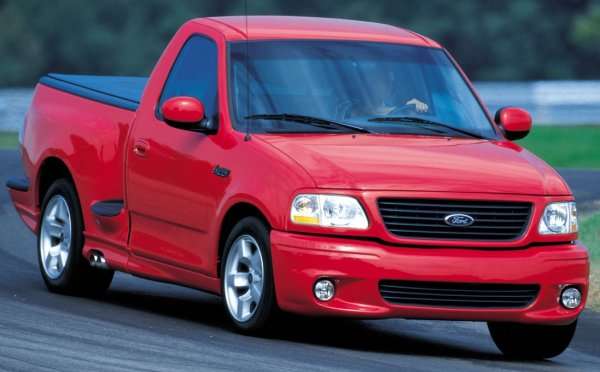 Online discussions on enthusiast forums and social networks make it clear that Ford F150 fans still want a “Lightning” high performance on-road pickup, regardless of how good the 2017 Raptor F150 might be on the road and off – mainly because these folks want a short cab, short bed truck that lacks the added weight of four wheel drive.
Advertisement

We have been talking a great deal about the new aluminum-bodied Ford F150 and the upcoming Raptor F150 over the past two years and shy of the blind negativity surrounding that new aluminum skin, I really haven’t read many unpleasant comments from Ford fans. I have, however, spent the last two years reading comments from Ford fans who aren’t happy with a Raptor that offers solid on-road performance. These folks want a proper F150 Lightning which follows the design process of the previous SVT Lightning back in 2004 and while they don’t seem to really care what is under the hood – they want a short bed, short cab pickup with a powerful engine, rear wheel drive and the ability to tear up sports cars on the quarter mile.

Why Not a Raptor?
When Ford Motor Company introduced the 2017 Ford Raptor F150, they were quick to point out that this off-road performance truck would offer impressive on-road performance. The company hasn’t announced power output, but we know that the new Raptor will have a specially tuned version of the 3.5L EcoBoost twin turbo V6 with somewhere in the area of 450 horsepower. We also know that the new Raptor V6 will be mated to a new 10-speed automatic transmission that will most certainly assist with impressive low end acceleration and we know that this new Raptor will have the most advanced four wheel drive system ever employed by FoMoCo. Finally, we also know that the Raptor will feature next generation Fox racing shocks and tires designed specifically for the new F150 and we know that the Raptor is available as either a SuperCab or SuperCrew configuration.

Based on what we know, there is a good chance that the 2017 Ford Raptor F150 will be one of the quickest full size trucks sold in America on pretty much any surface – especially among four wheel drive, extended cab pickups. However, the Raptor is bigger and heavier than the old Lightning, while having tires and a suspension system that are better suited for driving fast in the dirt. The Raptor might be quick, but this brawny 4WD pickup simply doesn’t offer the same attributes as the old SVT Lightning F150 and because of that – on-road truck fans want a proper Lightning.

What Makes a Proper Lightning F150?
back in the early 2000s, the Ford SVT Lightning F150 was one of the baddest street trucks in the world. The 2004 Lightning came as a regular cab, short bed pickup with rear wheel drive and a supercharged 5.4L V8 delivering 380hp and 450lb-ft of torque. This was the most powerful engine option in the smallest, lightest F150 configuration, making it the best on-road performance truck from Ford ever. Also, with simple modifications like a supercharger pulley swap and sticky tires, the Lightning F150 quickly became a quarter mile monster while also handling well enough to go autocrossing when you weren’t at the drag strip.

That is exactly what those Ford F150 fans want when they post online, demanding a modern Lightning.

Ford was close with the last generation F150 Tremor, as those short cab, short bed, rear wheel drive trucks with the 3.5L EcoBoost engine were as close to an on-road performance truck as the Motor Company has built since 2004. Even though the Tremor offered 365hp and 420lb-ft of torque – just 15hp and 30tq less than the 2004 Lightning – but the modern performance vehicle world has progressed far enough that the basic EcoBoost engine wasn’t enough to make a good sport truck.

For Ford to make an F150 Lightning which will make the enthusiasts happy, the solution is fairly simple. Build a 2017 F150 with a regular car, a short bed, rear wheel drive and the high performance 3.5L EcoBoost from the new Raptor. Give it some wide performance tires front and rear, add some street-friendly suspension and watch F150 fans line up for a truck that will very likely run well into the 12s in stock form.

The company obviously has regular cab, short bed F150 pickups and they have the perfect drivetrain in their arsenal. All the automaker needs to do is establish a street-sport suspension setup that will work with the Raptor drivetrain and even with a V6 – Ford will have the best performing F150 ever.