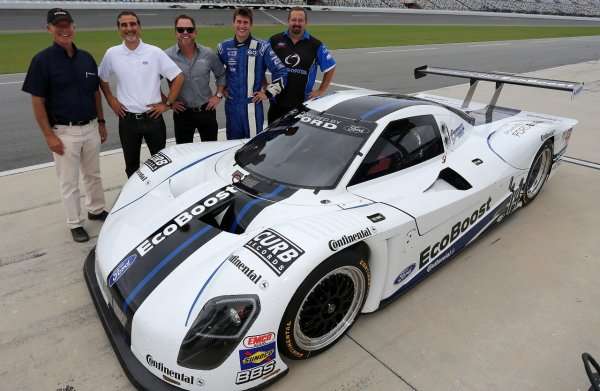 The new Ford Racing EcoBoost Daytona Prototype endurance racecar took to the high banks of Daytona International Speedway with the goal of breaking Bill Elliot’s 26 year old lap record speed and when the testing session was all wrapped up, the EcoBoost’d Michael Shanks Racing car ended up setting a trio of records.
Advertisement

First of all, the main goal of the Michael Shanks Racing Team was to hit Daytona International Speedway to break Bill Elliot’s qualifying lap record set during Speedweeks for the 1987 Daytona 500. Awesome Bill from Dawsonville set the record back in 1987 with a flying lap speed of 210.364 miles per hour with his Coors sponsored Ford Thunderbird NASCAR stock car and even though an endless stream of the world’s fastest racecars have hit the Daytona high banks since then, none of them have turned in a quicker lap time – until now.

Driven by 25 year old Colin Braun, the Michael Shanks Racing Daytona Prototype racecar powered by the 3.5L EcoBoost racing engine turned in an average lap speed of 222.971 miles per hour. This shattered the previous record by over 12.5 miles per hour but the MSR team took more than one try to set this blazing fast record.

“It was a challenging day. There was a lot of work put in by a lot of people to accomplish these records. The power in the new EcoBoost engine was incredible, and it was amazing how fast it came up to speed on the runs,” said Colin Braun on his record run. “Our first run this morning was 209 mph, and it was an edgy drive at that speed. I can only imagine how edgy it was for Bill Elliott doing those speeds in his Thunderbird stock car. But our crew kept working and adjusting on it, and it was a great feeling coming down pit road after the record runs and seeing how happy everyone was.”

The Michael Shanks Racing car used to set the new Daytona lap speed record relied on a chassis setup designed by Riley Technologies and a 3.5L Ford EcoBoost twin turbocharged V6 built by Roush Yates Racing Engines. Finally, Continental Tires offered up a special set of tires with a lower rolling resistance and a harder rubber compound than what is used on a normal road racer like the MSR Daytona Prototype.

“It’s a very proud day for all of us at Ford. To take a Ford EcoBoost race engine that is basically production technology, and to beat speed records that have been on the books for decades really says something for our new engine and the program we launched last week,” said Jamie Allison, Head of Ford Racing. “It’s a great way to kick off a new era of EcoBoost and sports car racing for Ford in the 2014 United SportsCar Championship, and we couldn’t have done it without Shank and his team, and the team at Roush Yates.”

“This is an engine project we started probably two years ago. There has been a lot of hard work by a lot of people to get it to where it is today, but this EcoBoost engine is relevant, state-of-the-art production technology in racing, and it brings with it power and high efficiency in the same package,” said John Maddox, road racing program manager, Roush Yates Engines. “When we broke the track speed record today with it, well, that was big. But to come back and set two world speed records that have been around since 1979 … well, that’s something you can tell the grandkids some day.”

The new Riley Technologies Daytona Prototype race car and the new EcoBoost twin turbocharged V6 race engine will both make their formal racing debut in January at the Rolex 24 – which is also held at Daytona International Speedway.