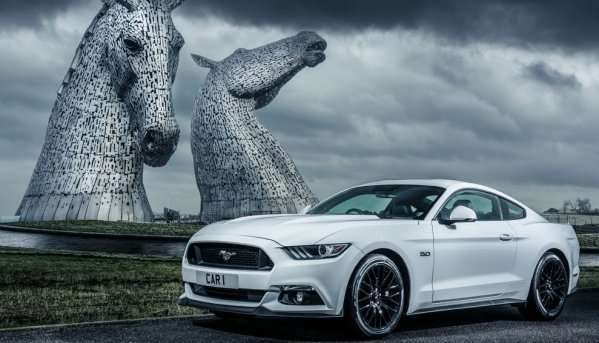 Ford Confirms Mustang as the World's Bestselling Sports Car for 2016

Ford Motor Company has confirmed we already knew, announcing that the Ford Mustang was the bestselling sports car in the world during 2016, with more than 150,000 examples of the pony car sold across 140 countries around the world.
Advertisement

The Ford Mustang was the bestselling sports car in the world for 2016 based on global new vehicle registrations.

“The legacy of Mustang continues to grow, and in places it never reached before,” said Mark Schaller, Ford Mustang marketing manager. “We continue to make it available in new markets, and drivers in those markets continue to respond with resounding approval.”

6th Generation Mustang Shines Globally
The 6th generation of the Ford Mustang was introduced late in 2014 for the 2015 model year, with a global debut program and a global sales rollout like the muscle market has never seen. Never before has an American muscle car been introduced from day 1 as a global vehicle, but the world has responded very positively to the Mustang in pretty much every key market.

Since the 2015 Ford Mustang first went on sale, the Motor Company has sold more than 395,000 examples around the world and of those, 98,000 were sold outside of the United States. In 2015, roughly 8.75% of the Mustangs built at the Michigan Flat Rock Plant were shipped outside of the USA and for 2016, that number doubled to 17.5%. Ford expects that the percentage of Mustangs built will continue to grow to 30% for 2017, even as the Mustang continues to lead the US market by a comfortable margin.

This growth during 2016 was due in part to big improvements in Germany and China, along with joining a long list of new, smaller markets including New Caledonia, Gibraltar and Bonaire. Even though Chinese Mustang sales are far below American sales, China is the world’s biggest automotive market and a 74% improvement in Ford Mustang registrations during 2016 played the biggest role in the global title – after the American market, of course.

Numbers Will Continue to Grow
Even though the Ford Mustang has seen impressive sales growth over the past two years, the availability of the new, improved 2018 Mustang should make the car even more popular around the world. Also, the 2018 Mustang will introduce Ford’s pony car to three new markets – Brazil, the Palau Islands and the Ivory Coast – along with three other markets which will be announced later this year.

As Ford can allocate more units to these booming muscle car markets in China, Germany and Australia, we can expect to see global sales numbers continue to improve while here at home, the Mustang is showing no sign of stepping down as the bestselling muscle car. Greater availability in key markets combined with new availability in smaller markets plus the strong North American sales will likely allow the Mustang to continue on for years to come as the world’s bestselling sports car.