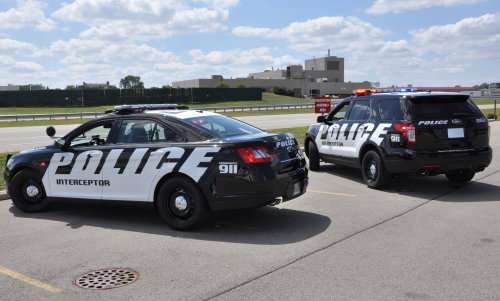 Ford Motor Company recently announced the official EPA fuel economy ratings for their new Police Interceptor vehicles based on the 2013 Taurus and Explorer – surprisingly not finding the EcoBoost’d cop cars as the most efficient in the growing crowd of modern special service vehicles but they are still the quickest.
Advertisement

While the 2013 Ford Police Interceptor based on the revised Taurus trails a bit in fuel economy measures, it is exponentially better in terms of performance and fuel economy compared to the previous Ford Crown Victoria police cars. The Crown Vic was the undisputed champion of police cars for decades so introducing the special service world to the more powerful, more efficient and better performing Police Interceptor will likely keep Ford atop the police car world.

Helping Ford Motor Company achieve cop car supremacy is the also-new Ford Police Interceptor Utility, which is based on the Ford Explorer. This brawny special service sport utility vehicle is powered by Ford’s 3.7L Duratec V6 that allows the Explorer police vehicle to offer 16mpg around town, 22mpg on the highway and a 0-60 time of just 8.4 seconds. This makes the Police Interceptor Utility more efficient around town and on the highway compared to the Chevy Tahoe PPV, while also being quicker than the V8-powered GM SUV.

Ford could have a more difficult battle in the SUV police vehicle race when the newly-announced Dodge Durango Pursuit arrives, as the Dodge SUV will offer the fuel efficient 3.6L Pentastar V6 and the 360hp Hemi V8. In street form, the V6 Durango offers 16mpg around town and 23mpg on the open road so if the police SUV can equal the civilian version; it will technically be the most efficient special service SUV. However, with added features in and around the vehicle, we will have to wait for official EPA fuel economy ratings so for the time being – the Ford Police Interceptor Utility is the top dog in this class.

One key area where Ford Motor Company has really improved things in a category that most consumers don’t ever consider is while idling. Police cars on average spend roughly 6.7 hours during a 10 hour shift idling while burning fuel at the rate of a half gallon an hour of idle time. The Ford Police Interceptor sedan is 35% more efficient than the outgoing Crown Vic when idling and the Police Interceptor Utility is 32% better when idling than the bestselling Crown Vic cruiser. According to Ford, with gas prices at $4 a gallon, a 100 vehicle police fleet running 35% more efficiently would save over $153,000 a year – that is a pretty substantial savings.